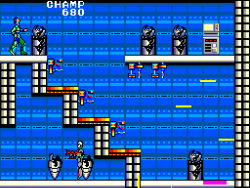 +
Three playable characters that you can switch between on the fly (after rescuing them)
Metroid/Impossible Mission-style gameplay (interconnected world, minor ability gating, character upgrades, respawning enemies, computer terminals you can input commands into to interact with the world)
Secrets (hidden upgrades, paths and elevators)
Fairly large game world
Satisfying sfx
Unlimited continues via a simple code, decent cutscenes (artwork stills and text), a couple of warp points via the computers, some player control over which stats to increase,

+/-
Basic map (basic room layout, your position and the main computer room position, explored rooms) - have to use a card at a computer terminal however
​Optional clues if you input certain commands in certain rooms (see the manual)
​
-
A bit repetitive
You don't really need the other characters if you explore thoroughly and focus on leveling up J.J.
No enemy variation and only one boss
No save feature
​No difficulty options
Some unavoidable damage from traps


Review:
In this game based on a fairly obscure 80s anime of the same name, the story goes that J.J., a member of the peacekeeping space force known as the White Knights, is sent on a mission to destroy the evil Nohza empire's base on Planet X, and to rescue his teammates in the process.
To do it, he must infiltrate the base (a large, underground labyrinth) and acquire the five floppy disks that will enable him to input the self-destruct sequence at the base's main computer, then make his way out of the underground base and back to the surface where the White Knight's spaceship waits.

Sounds a bit familiar, doesn't it? While some would say this is the Metroid clone of the system, a closer look at Zillion shows that it plays more like a Metroid/Impossible Mission hybrid, with a few new ideas of its own.
As the player makes their way into the labyrinth, they'll find one of many rooms containing a locked door, a computer terminal and what looks kinda like trash cans. Shooting these and examining them, what looks like mirrored and stuck together number symbols are displayed and it's up to the player to memorize four symbols, interact with the computer terminal and input them as a code (in any order) to unlock the door or elevator to the next room or corridor.
Sounds simple enough, but they also have to fight off respawning soldiers, avoid laser traps, mines, walkways leading into traps, moving turrets, and yellow lasers that function as alarms, alerting a decent number of soldiers when moved into.

To help even the odds, there are additional containers storing useful items and you can also find a few hidden items here and there by simply firing a lot at suspicious looking parts of the scenery. First off there's health restoring, freshly baked (I hope) bread, the items used for the main computer, and a scope that lets you spot the laser alarms. Pretty straightforward.
Second is weapon upgrades that make your gun reach further and hit harder, as well as make an increasingly cool noise when fired. There are three gun levels in total and one needs to upgrade to be able to destroy the other two kinds of containers found in the labyrinth, serving as one of two ability gates in the game.
Third there are ID cards, items used to interact with each computer terminal. Other commands than "open door" can be entered and these can be used to temporarily disable various traps in the room you're currently in, as well as display a basic map showing the labyrinth's layout, explored rooms, the main computer room and your current position.
Furthermore, there are two commands that let you teleport within the base, one leading to the elevator near the surface, and one leading to the nearest elevator to your position. Strangely, there's also a suicide command - possibly a first for the era. In one of the more obtuse design decisions of the time, this one can actually be used to display optional clues, but only in certain rooms of the base. Luckily the manual just tells you which rooms to use it in.
Unless used to open the next door, ID cards are also one use only. This adds a tactical element to the game where the player has to choose between making a room easier to traverse and saving up cards for possibly harder rooms later on.

Moving on, there's also the Opa-Opa ship symbol. A cameo from Fantasy Zone, it functions as a level up here - life bar, movement speed and jump height are increased when picking these up and you'll need to jump high enough to reach certain platforms later on in the game.

Returning to ship via one of the warp commands or by backtracking lets you fully heal yourself, and this will come in handy since A. bread is in limited supply, B. you only get three continues and B. there's no way to save your progress. Yeah. Probably the main flaw of the game, however it is fairly short as far as these games go.
Speaking of flaws, there are a few others. The controls for jumping are a bit unresponsive, meaning you have to press and hold the button to actually jump and then there's a short delay before it actually happens. As you get closer to the end, you'll notice that there's not a lot of variety after you've found the various traps and initial enemies, and there's only one boss in the whole game. There's also just the one weapon in the game; no ice beams or bombs here. Lastly the stealth element is also underdeveloped as there's often no way to avoid detection, only to control when it happens.

Should you make it to the next sub area of the base, you'll eventually find and rescue one of your two teammates and discover (in case you didn't read the manual) the next new idea that Zillion has going for it - rescued team members are playable, can be switched between on the fly, and their stats also differ from J.J.'s. Cool! Note that one could potentially focus on leveling up J.J. enough that they wouldn't need to use the other two teammates to progress, but they are still useful for the extra HP.

Finally, the music deserves special mention as some of the most memorable for the SMS, and even the sound design is pretty good with satisfying feedback for your actions. All in all, Zillion is a worthy addition to the collection, particularly if you like the aforementioned similar games. And if you're wondering about the sequel, sadly it is a more standard action game, though it does feature more variety in the enemies and bosses as well as a vehicle that can transform into a flying mech.

Fun fact: The Zillion gun featured on the title screen and which is what you're using as your weapon, is the design that Sega based their SMS lightgun on. The JP name for the game, Akai Koudan Zillion, translates to "Red Photon Zillion".


Comment (old):
The Metroid clone of the system, or rather the Metroid/Impossible Mission hybrid. Well, it's a good one for sure, and I for one find the 'remember the code' mechanic quite addicting. Then there's the music which is some of the best for the SMS, and even the sound design is pretty good with distinct, progressively more chunky noises for all of the guns. There's a few secrets to discover throughout the labyrinth, giving it some replay value, and it features one of those cool partner systems where you can switch between characters on the fly. 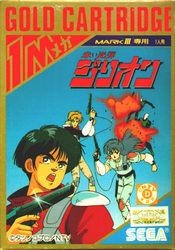 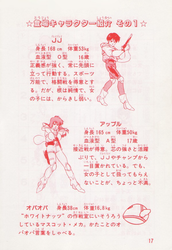 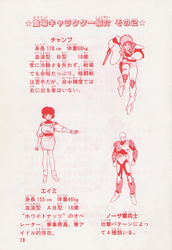 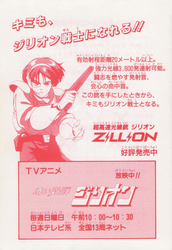