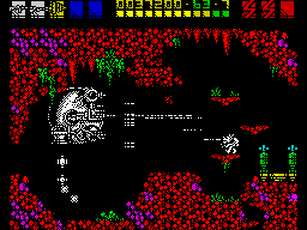 ​
+
Some alternate paths through levels
Breakable wall tiles which some enemies and bosses can also break
Ammo-based shield that you start with (can be toggled on or off with down key, destroys enemies you move into) - can be recharged only at certain green pads with a moving part underneath them which are placed in the levels
Frequent checkpoints
Control config before starting
Decent first boss (only two of them though and the second one sucks)
Mid-air control during jumps
Upgradeable main weapon (5 levels: wider shot, higher rate of fire, laser (keeps going after hitting and killing an enemy), rotating gun drones, configurable spray shor (3-way, 5-way, 4 directional (cardinal directions) and 8 directional)). Collect upgrades from the rocket looking objects placed around each level
Pretty detailed tutorial "video" before playing
Temporary speed upgrade (gained from the question marks which trigger a "one armed bandit" mini-game - these also have two negative effects)
Some hidden paths
Some large sprites and nice explosion effects, knockback effect on enemies
Smart bombs (can hold three at a time, space key)
Some good enemy AI

-
Some control/interface issues (up to jump, keep jumping if you hold up, no jump height control, no auto-fire, no weapon inventory, floaty jumps, can't move backwards while shooting)
No save feature (die in one hit if not using the shield and there's touch damage)
Trial & error (bosses, sometimes can't tell if you can shoot through/behind something or not, confusing how you'll often see what look like exits at screen edges but they're really walls or (much worse) death pits)
The time limit for each room/screen (die from taking too long) is a bit too short
Can't backtrack inside levels (to recharge or take a different path)
A bit short (two long levels and about 40+ mins in total, use a password after beating the first to access the second)
No music