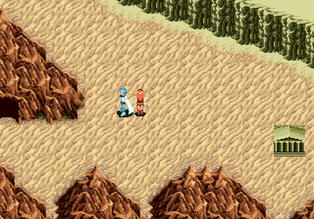 This is a color hack for Phantasy Star III made with Aridia and HivePal, taking the graphics of the game in the direction of games like Soleil and World of Illusion. The current version is complete for Rhys' (generation 1), Ayn's (generation 2), and Sean's (generation 3) scenarios. All battle backgrounds, enemies and most field and cutscene graphics for those have been edited.

The patch should be compatible with other PSIII patches on RHDN.

Get the IPS File here.

​
Known issues (0.4):
-The Samurai, Kensai and Bushi enemies share a palette bug which makes the third shade of their hair have the same color as part of the background where you face them.
-Cycling/animated colors are not edited yet as I don't know how to do it. These rarely occur but two examples are Wren's transformation scene and the bottom part of the beach in the game's intro.
-There's some glitchy tiling at the bottom of the screen during the opening (scrolling text) part. This isn't caused by the patch and is an issue with the original game. You probably won't even notice it unless you're looking for it though.