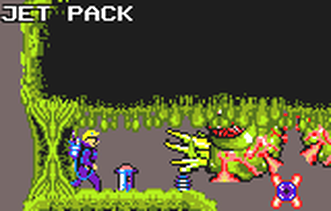 
​+
Six different game modes (easy/mode 1 - find the exit, exploration/mode 2 - find the rescue ship, action/mode 3 - somewhat harder version of exploration, logic/mode 4 - no gun+tools and monsters are restored after you die, arcade/mode 5 - one life only, suspense/mode 6 - time limited mode where you pick up mushrooms to increase the timer)
Some interesting tools (jetpack - can't pick things up or shoot while using it though, enemy bait, pool cleanser - turns a slime pool into water (some hidden paths are placed underneath these pools); can only carry one of each in an inventory) - these are all single use power ups however
Some interesting gimmicks (various different floor surfaces (slippery - automatically make you slide down/forward, sticky - move slowly and can't jump, bouncy - bounce higher from falling longer before touching) which are sometimes combined, the slime mechanic - a sort of poison mechanic which replaces your typical health bar (get progressively more covered in slime as you get hit which you then have to wash off in water/with gems/a slime shield power up or you'll eventually die), rooms where the layout changes shape in real-time)
Hidden doors (invisible ones and breakable walls that look like regular surfaces - you use the map to find these rather than look for clues in the in-game view)
Smart bombs/mega bombs (these also destroy gems which help clean you up and are worth points+remove the water- and slime pools from a room)
Decent map system (auto-mapper which shows explored rooms and your position+pools of slime and water and hidden paths if you explore close enough to them; can't place markers on it and it doesn't show found items like jetpacks)
Temporary gun upgrade - only one level though and it's also removed if you die
Temporary shield power up
MP link mode for up to 8 players (didn't try it)
Some branching paths through the levels
Cool how some rooms are more dynamically shaped and connected than in many other maze platformers or platform adventure games of the era which tend to have more of a square grid-shaped room layout
Some nice visual effects (scaling, stretching and wobbling)
Some decent puzzles (spatial awareness - going back to use the jetpack where you couldn't jump or climb, luring enemies away from a narrow path, some timing puzzles)
Decent sense of vulnerability in Logic mode
10-way aiming

+/-
Password save anywhere (displayed when pausing)
Pretty frequent checkpoints and unlimited lives in most game modes - lose all inventory items besides the map if you die though
Pretty frequent healing points (water pools) and you can create more with the cleanser item
In-game manual
Some resource management (can't farm for items)
Suicide/pop command (always there in the item inventory - having it there means you can accidentally pick it if in a rush as there's some delay if you tried to pick up an item you already have there where the game says "you already have one" in the same spot as the item inventory display)
Some instant death hazards (red boogers (from flying red enemies) - they also go through a shield)
Automatically grab onto and climb walls beneath you when you move up to a ledge (default ability) - can be bad if trying to descend quickly and there's a bit of delay before you can jump as your avatar grabs onto a ledge
PoP-style jumps when jumping over liquids (horizontal focused). Jumping is also faster than walking
Can only carry one shield at a time
Creates a more seamless world with fog of war over rooms you're not currently in (Rogue?)
Can't shoot straight upwards or downwards - occasionally annoying
Red gems (best gems) can be destroyed and they shoot out red boogers if you do
Some rooms with infinitely respawning worm enemies spewing forth all over the place (trap rooms basically). Levels are otherwise persistent in that enemies and items don't respawn and altered pools stay altered
Second mode is a lot harder than the first
Quirky soundscape which is a bit reminiscent of Metroid II
No bosses beside a mini-boss like enemy in action mode
More zoomed in view than in the other versions (leads to some cheap hits and having to check the map more often)
The fog of war can lead to cheap hits when entering some rooms but it's also possible to use enemies' inability to follow you between rooms to your advantage - can't shoot into it and hit enemies however
Cutscenes use in-game graphics in this version
No swimming

-
Various control issues (if you're in mid-air while activating an item and are carrying a jetpack then the jetpack is triggered instead (other items can't be used while in mid-air), can't move while checking the map+it takes a while to draw+gameplay doesn't pause+can't view it while climbing, can't browse the map - only displays part of the world, very floaty jumps+no mid-air control and you automatically jump forward a bit even if you don't press forward, can't aim in mid-air+you automatically aim downwards when jumping, overly tight camera when jumping so you don't see the ground, slow aiming controls - you hold the button and shoot while pressing a direction to aim, can't move while shooting (can jump as well as shoot while hanging onto a wall), can look up/down but annoyingly the camera doesn't snap back automatically when letting go of the d-pad+you can't place it so your avatar is centered vertically+it scrolls slowly, have to press down to pick up items - breaks flow considering you have to pick up gems a lot, diagonally jumping into the edge of a platform/ledge from below makes you bounce back and turn around, can't turn around while shooting, have to pick "show score" in the item inventory to see it, shields could've lasted a bit longer instead of the game placing them everywhere and making you stop to pick them up, map display could've been mapped to the pause button, can't use items while climbing, sometimes unforgiving hit detection when trying to pick up an item, you still pick up gun upgrades even if your gun is upgraded (wasting them), sometimes unforgiving hit detection when shooting enemies)
Some tedious aspects (annoying how a shield won't defend against energy barrier hazards destroying all your tools besides the map - would've been a decent obstacle otherwise (and it is in rooms where you can actually avoid it), the ability gating would've worked better with permanent inventory items and/or being able to carry 2+ items at once - especially since you can't just farm for new ones if you don't have what you currently need but have to backtrack or sidetrack instead and in some cases you can't go back to where you wanted to use an item due to energy barriers destroying your inventory items+since items don't respawn after dying you might have to go quite far, too many enemies kill you in almost one hit from contact damage, generally can't avoid getting hit by slime boogers that enemies drop when killed, annoying repeated sfx when there's some slime on your body, bombs aren't common enough consider they're lost if you die, level design sometimes feels randomly slapped together with rooms full of enemies that are protecting nothing and are placed in dead end paths, found hidden vertical paths through floors could've been displayed in-game instead of making you bring up the map each time since you can't spot them while playing, the enemies that latch onto you and can't be shot or pushed away - they make you unable to pick up items as well (either have to find a pool or shoot them in a doorway to avoid being caught), the enemies that briefly dig out of the ground and back down are too hard to hit at times, annoying how the red flying enemies stop chasing you if you move just a bit too fast, the game sometimes places a jetpack where you need another one to reach it and only for the purpose of getting that additional jetpack - should've just been fuel for a permanent jetpack)
Trial & error (the hidden enemies that eat you immediately in exploration mode if you pass above them - no clues (would've been sort of ok if you could lure them out with bait but nope), some cheap traps in exploration mode (slippery floors leading into energy barrier traps, red gems placed behind doorways - they explode if shot), jetpack exhaust fire triggers an explosion if you touch a pool of water - wtf?, smart bombs/mega bombs kill you as well if you're in the same room, the elongating and retracting snake enemies - they kill you almost immediately and can't be killed without a bomb, some cheap enemy placements, can't tell where you'll get permanently stuck from not being able to jump out of liquid beforehand, sometimes hard to see red boogers against the background, some leaps of faith due to not being able to look far enough down, booger spewing trap in action mode, some false floors over slime pool traps in action mode)
Doesn't let you pick up boxes or other objects to use as platforms
Each mode is pretty short compared to a full maze platformer or platform adventure game (about 30-40 mins for Easy, 1h+ for Exploration and Action; the zoomed in view forces you to play slower in this version)
Sometimes odd color choices (mode 2/exploration)
Kind of repetitive (there are unique enemies to the other modes compared to Easy mode)
Sometimes uneven difficulty (various rooms where you just stand and shoot as a bunch of enemies move into your shots)
Some annoying music
Some slowdown in rooms full of enemies (still better than in the other versions which is impressive)
Lame endings
No mini-map in this version

Notes:
-Played through the first two modes and about halfway into the third