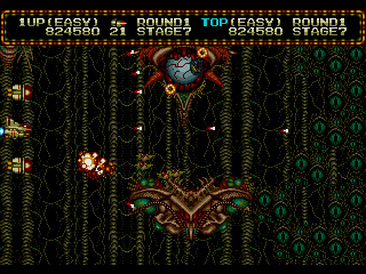 + Hilarious intro which spawned one of the first big internet memes and looks pretty nice, the tractor beam (grab and throw smaller enemies (can shoot normally while an enemy is grabbed); a bit underutilized), interesting smart bomb system (carry it and throw when you want to like you do the enemies, hinders the tractor beam but you can still shoot normally), gun drones (no formation options though), some nice touches (recoil on the gun drones when they get hit, mini-boss in stage 1 exiting its cage, stage 7 aesthetics), difficulty options, joke ending on easy (dancing raisins), decent variation later on, the soundtrack makes pretty good use of the sound chip,

+/- Bombs that you hold on to can get shot or hit by the environment, rips off R-Type a few times, fairly easy to rack up extra lives

- Doesn’t become interesting until around stage 4 or so even on Hard, plenty of dead space as well as long and easy parts, slow pace and low intensity overall, no boss music, the green weapon is overpowered in most situations, only three different weapons, no manual speed adjustment and the highest speed is a bit too high for most situations, some difficulty spikes (stage 2 squeezer trap, stage 7 with the wrong weapon), hard to recover after death later on (you lose weapon power and speed), so-so colour use, no weapon inventory, somewhat weak explosions and overall sfx, the ending isn’t nearly as good as the intro