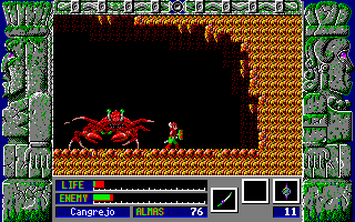 +/-
Frequently respawning enemies
Almas is also used for experience points (go to the town sage after you've collected enough - they still count after being exchanged for money)
Two currencies (almas (1 almas=6 gold) - seems kind of pointless)
Pretty steep difficulty curve
Deteriorating armor
Can hit an enemy right behind you with your sword swing (similar to Castlevania), the game seems designed to make you automatically use an upward attack if an enemy attacks from above but it doesn't work reliably, lose all gold and half almas after death, looping dungeon areas, linear structure?, pretty limited inventory, can't walk up minor upward steps, get sent back to the first town after death unless you carry a certain item that sends you to the previously visited sage,

-
Some control issues (can't jump onto or off of vines, auto-fire jump, some delay after landing from a jump)
Short attack range and super short invincibility time after taking a hit (makes it hard to even pause and use a potion at times)
​Tedious level design (easy to miss a jump and have to redo a fairly long segment, near pixel perfect jumps near the beginning, moving platforms don't reset position until you re-enter the sub area, platforming on slippery ground in glacial caves)
Need to start backtracking and saving after bosses after the third one since you can only save in towns and might die on the way to the next town (losing half the almas reward that you got from the boss)
Some cheap and randomized enemy spawning points (enemies spawning above you as you're climbing a vine)
Plenty of grinding to buy decent gear and to make boss fights doable (leveling up increases HP), no control options? (press up+down to swing above your head while standing, up to jump) - can be mostly fixed with joytokey or similar, no difficulty options, can't skip or speed up dialogue on a per sentence basis (can increase game speed but it barely has an effect on dialogue scenes), no HP regeneration in town, sometimes odd color choices (very limited palette though - MCGA), found potions are used immediately, no in-game maps, rascar spell (drops rocks) is near useless


Comment:
I gave up on this game after quickly being killed by an enemy while (thinking I was safe) checking a map in the ice cave for the next town location after beating the giant bird boss. If it was the 90s I probably would've soldiered through this one and it does have a some very nice aspects for the time like the music, fast movement and animated NPCs... but the combination of grinding, repeating long parts after missing tight jumps, super short invincibility time after taking a hit and now the slippery ground in this area is enough to make the game be not particularly enjoyable for me.