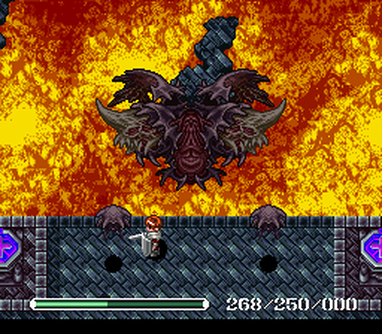 +/- Ditches the bump style combat for a more traditional style, no animated artwork for cutscenes, shows the exact damage done with each attack next to the enemy, can't move while attacking (somewhat worse flow), can't use magic during boss battles (can use items), more wordy story than in Ys 1-3, can only regenerate health in combat areas not connected to a dungeon? (also need to enter a town area's house before regenerating when at a combat area connected to a dungeon - the HUD disappears as you enter the town area so you can't see your HP being regenerated there), short knockback when hit, narrator text kicks in whenever the main char is supposed to speak, almost completely linear structure (can sidetrack for some shopping and grinding at times),

- Some control and interface issues (can't buy more than one of an item at a  time, can't see a piece of gear's stats or if you have it in the shop, can't equip a bought piece of gear from within the shop menu, can't jump diagonally nor control jump height, no mid air control, can't end dialogue with the cancel button, some very slow text that can't be sped up (reading notices, finding items), some enemies take too many hits to kill considering their patterns, mostly uninteractive environments (and there are hidden items here and there with no visual or other clue), pointless of the game to let you go northeast of the first town for several screens only to walk into a dead end, invisible walls here and there, no jump sfx, fake dialogue choices, can't ask Niena about the medallion before it's stolen (only look at it), plot oddities (why does the woodcutter chief go with the medicine when you're the one who agreed to help?, villain gives you a hint on how to get to her after she takes the crystals), mostly ineffective spells (some very slow spell readying animations and charge times, some with poor range), some slowdown, some bosses go down too quickly, short invincibility time and sometimes no knockback (fire snake boss) when hit, no strafe/dodge or run moves, sometimes unforgiving hit detection, no dungeon maps, some backtracking (no wing item), difficulty dips (easy earth crystal boss, south tower and Baruq), somewhat generic regular enemy designs overall, no alternate sword attacks or combos, no sense of urgency in the escape from the collapsing temple segment, unskippable in-game cutscenes, repeats some enemy types too many times, most dungeons lack puzzles, so-so directions before the hall of judgment (supposed to go to the inn to trigger going into the hall - not go north of the western area as mentioned), overly cheap healing potions (at least there's a carry limit but they're still too good vs. bosses),