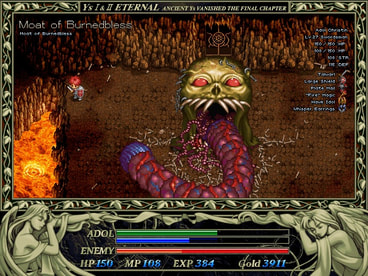 +
Magic (fire - ranged attack, reveal/mask of eyes (helps with the limited field of vision in some dungeons), teleportation/wing)
Diary feature (it's not a full fledged journal/log feature though)
Lets you occasionally block enemy attacks like in Ys I SMS via a ring
Better enemy variation and somewhat more interesting enemy behavior
Healing points in dungeons
Quick toggle between rings (l1; not spells though (can be done in the PSP version of Chronicles)), improved enemy spritework, stackable healing items, teleport to any visited town, fleshes out the villain(s) a bit more (in a pretty cliché way but still), faster level/gear progression early on, faster saving than in Chronicles PSP, you can shoot villagers with fire magic (harmless but sometimes results in new dialogue), some hidden items (free short sword at the ruins for example), merged armor and weapon shops, interesting how the first dungeon actually connects to the first town via someone's basement, some innovative mechanics (transform into a demon to talk to enemies, gradually learn enemy stats by killing more of them (need to drink the bestiary potion first), bargain for a better iron ore price), interactive dialogue with key characters - choose the subject to ask about, teleport back to town (Wing/Warp), regenerating health if you stand still in the overworld (not in dungeons)), fast movement, pretty good gear variation, nice intro, character stills and portraits during important or interactive dialogue, difficulty options, time attack mode, choose between midi or chip music, some neat effects (like the light magic orb, the clouds and how enemies die, text displaying the name of the current location, etc), free movement (instead of four- or eight way), can speed up individual message boxes, some good bosses (first boss, ice ridge; fire spell is a bit too strong against them though), mini-bosses, pretty cool build up towards the final battle, better ending (mostly in-game epilogue with expressive sprites and some slightly animated art here and there)

+/-
Much higher level cap which you probably won't reach until the end of the game (better balance and sense of progression though it also means you can pretty much always grind for a bit to make a boss or segment easier)
A bit more dialogue heavy than the first game
Save anywhere except during dialogue or boss battles (tons of slots, slots show the location and time spent)
Same simplistic battle system except for the ranged attacks
Semi-silent protagonist (a narrator kicks in telling the player roughly what Adol talks about instead of him talking directly)
Walking no longer helps with combat (hits are more frequent when running), off screen enemy respawning (generally a good thing except for some cases in the dungeons), the 'get item' sound rips off Metroid, no jumping, can't access the equipment and item menus during boss fights (can still use consumables if equipped before the fight), rings have no effect during boss fights, don't need to care about positioning during combat on Easy difficulty, no exp or gold losses after death and there are checkpoints where you entered each area, pretty short (can fairly easily be finished in under two hours if you know what to do), you can exit most boss battles at will, more linear structure, overpowered homing fire magic and very overpowered shield magic,

-
Bell Tower/Zava boss is like 20x harder if you missed the sword in the sewers prior (you only use your fire spell in the fight and the game doesn't tell you that swords are related to your spell power)
Doesn't show which floor you're on in dungeons
More maze-like dungeons (with more dead ends)
Some trial & error (some bosses can't be hit in melee, standing in the right spot with the mirror to find the real door in the ice ridge area, a demon in the lava cave makes it sound like you should use the hawk idol instead of the demon bell to lure out the Roos, can't ask the old man or the guy at the town gate in Ramia about the black pearl right away (need to remember that you gave it to the boy earlier on because the journal is vague about it (of all things)), finding the Ys core/Dalles fight (poor directions and the game creates a distraction with the "Lilia being lost" cutscene), bargaining for a better ore price - wait until you've entered the ice area to sell it, you can attack without a weapon early on, need a high enough level or fire magic to damage the first boss, no NPC clues for the evil bell's location?, easy to miss the second piece of ore in the mine since you can only carry one at a time)
Projectile shooting enemies are actually easier on Nightmare difficulty? (only shoot 1 projectile at a time)
Plenty of dead space in some areas, no maps (doesn't become a big problem until --- though), still can't sell weapons or armor, poor joypad control config, some control/interface issues (can't regenerate while checking your inventory/equipment or talking to people, no gear stats in shops and exiting them is somewhat slow, in-game menu doesn't wrap around and is missing the Use option (need to access the pop up menu at the lower edge of the screen using the mouse or press the Use button on a joypad), no other menus wrap around, Adol auto-talks to NPCs when you move close to them, can't skip repeated dialogue (annoying since you'll want to talk to many people more than once but there's still a lot of them with only one thing to say)), poor environment interaction (lots of eye candy in houses but nothing you can pick up or investigate - bad since you'll want to pay attention to the environment in the ruins a little later so as to spot the crack in the wall), somewhat generic art style (minues the character stills, enemy sprites and portraits), doesn't make much sense that you learn enemy names by killing enough of each one, the Tarf escort mission (slow, weak, bad pathfinding), somewhat tedious lava cave boss, Zavaas can't be talked to as Adol (the game expects you to still be in demon form when you get to her/him), sometimes uneven difficulty (Tarf dies in one hit, bell tower boss), poor directions to the silver pendant (someone said the western canal when it's in the north east?), sometimes poor item descriptions (need to use the hawks with a magic spell), backtracking down the bell tower (and back up a bit later) and to Sada (Maria's husband), minor bug at the start of the Zava fight (sometimes you'll auto-fire weak spell shots instead of charging when pressing the button down - fixed after releasing the button), have to re-read the dialogue before the Zava fight if you die there (but not if you exited the room, which makes it even more annoying that they didn't think of it), no message prompt when exiting a boss fight (fairly easy to do by accident in the Zava fight), still pretty cliché story with mostly shallow characters (especially the villain and hero), no alternate physical weapons, the dalles fight (pretty much a battle of attrition, easy if you brought more than one herb), the final boss is way too easy thanks to shield magic, somewhat forced emotional scene between Feena and Adol in the ending