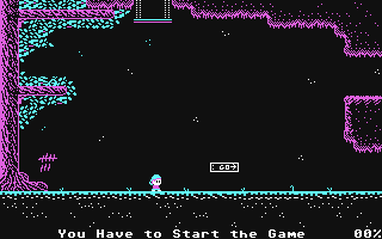 +/- Very frequent checkpoints (see below, kind of feels like playing with save states, quick fix for an uneven difficulty curve), two moons?, pretty small world, open ended metroid style gameplay, many generic items to collect for a better ending (it's not very good though), uses a garish two color (purple and cyan) palette (four if you count the black and white), few abilites and no weapons, options screen sort of gives away the riddle

- Trial & error (tilde key looks different and is placed different on european keyboards, game starts over without any power ups (and auto-saves!) if you go into the last portal without answering the riddle, some cheap room entrances, some checkpoints are bad for you, some rooms are too hard on first try, no map and the basic graphics make it easy to get lost, some troll challenges (the upper right money bag in the hardcore prawn room for example), plenty of dead space (the long hallway near the "grawl!" room is particularly annoying), some backtracking despite all the checkpoints everywhere, forced "crt frame" overlay on the graphics (makes it harder to see where some platforms near the edge of the screen end and the bulge effect is kind of distracting, however the smudging of colors and glow effect is kind of nice), bad endings, no in-game music and so-so sfx (80s PC nostalgia I guess), somewhat high default jump height, F12 for screenshots doesn't work, ​
some money bags are too hard to spot