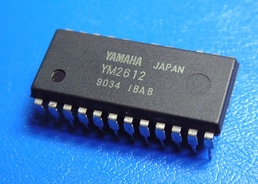 First used for games in late 1988, this chip is most well known for its use in the Mega Drive/Genesis console, where it was combined with the SN76489 chip (which was also included for backwards compatibility with SMS games). Certain Mega Drive games used sound drivers that allowed for more than one sample to be played at once as if on separate channels (Skitchin', Triple Play '96, Ristar, Alien Soldier), usually at a lower sound quality. The console is somewhat infamous for its scratchy sampled sound, but the quality varies greatly between games. See this video by Lazy Gecko/Savaged Regime for a short presentation. At the end of the video you can hear an example of the DAC being used as a .mod player via software mixing, streaming a song with multiple channels of sample-based sounds in use. It was only used in Toy Story as far as I know. This is how well the MD can play back sampled audio outside of a game environment and without size limitations.

Going back to FM, SSG-EG is a rarely used effect that can be applied to individual operators of an instrument for a reverb/echo-like effect similar to ones found in some SNES game OSTs (it sort of retriggers the note at an editable speed and can also reverse the attack on these note retrigs), as well as for a rudimentary speech synthesis and to improve some percussion sounds. One example of SSG-EG being used is in Phantasy Star II (Phantasy, A Prologue).

Another effect that was rarely used (the only example I know of is this fan cover of a Shovel Knight track) was the LFO speed control, which can help improve FM snare sounds when used in conjunction with SSG-EG. It's a shame it wasn't since it sounds much better than most standard FM snares.

Even today, new uses for FM are sometimes discovered by homebrewers. For example, you can emulate the C64's pulse-width modulation effects in FM using two detuned channels of opposite saw waves, and C64/NES-style percussion using two instrument envelopes in quick succession. You can also make pure saw and square waves (50%), the latter of which was sometimes done back in the day. Some homebrew works also emulate 25% and 12.5% square wave, as well as the triangle wave used on NES.

The Mega CD's PCM chip, RF5C164, can use eight channels of up to 32 kHz, 8-bit samples with good timing/no jitter, and can loop sample waveforms. The samples are fetched by the PCM chip, so very little CPU time is consumed to play the samples. It could also be combined with the MD's sound chips.

However, developers had to load the sample into the PCM RAM, of which there is only 64 KB. The small size of the RAM limits the size and number of samples you can play without needing to reload the RAM. The samples themselves are in a rarely used 8 bit sign/magnitude format, so they needed to be converted.

This MCD chip could be combined with the MD chips for a chiptune sound similar to the Neo Geo's, and this combo was actually used in a surprising amount of MCD games (scroll to the bottom for a list of the best examples). The combo was also used in some games for the Pioneer LaserActive, specifically ones requiring the Sega PAC module for that system, which is also the majority of them.
​
PSG Usage in MD/GEN Music Documentation (WIP)
Channel 3 mode usage documentation (WIP)
​
​Youtube Playlist (​combined)
​

Best of the rest