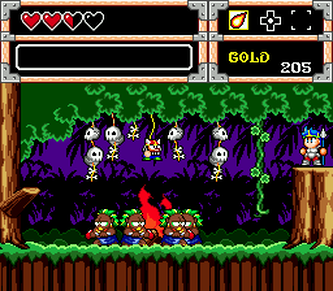 ​
+
Good bosses overall
Magic is more useful and interesting in general (enemies respond differently to different spells)
Two different main weapon types (spears and swords, can't use a shield while using a spear)
Several towns with interactive characters
Familiars (they attack the enemy or give minor bonuses such as healing (fairy) or gold (dwarf child), they are all pretty weak though)
Some of the better MW1 features are re-used
Mini-bosses
You can crouch and attack (somewhat safer against small enemies)
Return magic (teleport to the previously visited inn, you get it a bit later than in MW2 GG though, while you can't choose which inn to teleport to there are shortcuts between most areas)
Save feature
Hidden doors and gold/treasure, some interesting mechanics (Ocarina and Sphinx boss), medicine/potion (heal where/when you want to instead of having to go to a hospital or get a heart drop, can only carry one of each at a time though and buying a better potion replaces the one you're carrying), very little backtracking (doors interconnect each area quite well), elixir is back (saves you from death once, you can only hold one at a time here though), pretty fast underwater movement, momentum based jumps (can't really make use of them except for in the ice area though), most dialogue can be sped up (hold to speed up one full text box at a time),

+/-
JP version had a much less frustrating final boss (on the other hand it was way too easy there)
Can't go underwater from the get go
Shields only block projectiles
Can’t move while crouching
Somewhat shorter attack range with the first sword than in Monster World II/Wonder Boy III: The Dragon's Trap (SMS) - on the other hand it's a swing rather than a stab here so it has more vertical reach (no need to duck to hit the smaller enemies early on)
​Can't see exact gear stats (instead you get a more vague star system showing if something is better or not in the inventory, can't see these in the store before buying something unfortunately)
The first skeletons you meet take too many hits to kill considering how easy they are (these are put where they are to make you not go any further in that direction though)
A bit more linear structure than in MW2 (you can only skip the oasis boots)
There's a small item trade sequence but it's not needed since it's easy to find the amulet without a clue
No run or slide move
Chests don't refill after loading a save here?

-
Shion moves very slowly initially (buying the boots in the beginning helps a bit but requires some grinding - about an hour later you can get some good boots to solve the problem or you can use a GG code from the beginning which helps a bit (note that the "move much faster" one makes you slide too much)) and he also can’t attack up or down (spears and magic help somewhat with this)
Can’t adjust the height of your jumps
No boss in the water area
A bit short and too easy overall (up until the end game which still isn't that bad if you use the right magic, have 11+ hearts and bring a hi-potion - you just have to be prepared to get hit a lot)
Less transformations (progress is sometimes handled via magic items instead such as the ocarina and the trident that lets you swim/breath underwater)
Frustrating final two bosses (pretty much battles of attrition instead of a test of reflexes)
Shield magic is almost useless and pretty expensive when you first find it in a shop
Only 1 save file
Inventory only accessible when standing still on the ground (adds frustration to some battles) and not using Power spell (no other spells are usable during its effect either)
No difficulty options
The soundtrack doesn't use the MD sound chip fully (no DAC or PSG; still does a pretty good job with what it does use overall but for example the final castle music could've sounded a lot better), can’t jump down through platforms that can be jumped up through (no level design puzzles that use this restraint either?), some grinding required to buy equipment when you first encounter it (lilypad, ice village, dragon village, use a GG code to get more gold per enemy killed - helps early on but not mid- to late game where you'll need a code for infinite gold (no gold is lost when purchasing items but you still need to have enough to pay for them) instead) - you don't really need most of the ice and volcano area equipment though (partly because you'll have to wear the pygmy gear in the volcano), Thunder and Power spells are too strong, rather plain dialogue throughout, odd scene with the green dragon NPC (no - the blacksmith doesn’t give details, the dragon child also keeps coming out of its egg when you go to fetch it after losing its company – did time go backwards?), replaying the entire boss gauntlet if you die on the frustrating final boss gets really tedious, poor choice to have the player sit through the staff roll without changing the boss music before showing the ending, enemies occasionally don't drop anything unlike in MW2, slightly floatier movement than in MW2 (when turning around in motion, not when letting go of the d-pad), armor and boots don't show on your avatar's sprite unlike in MW1/WBiML (your weapons and shields do though), some enemies take too long to kill considering how easy they are (giant crab, sea cucumber), can't pick up coins as soon as they bounce upwards from where you killed the enemy, annoyingly slow acceleration when on ice, some dead space and dead ends, can't speed up some dialogue, some trial & error (finding the heart in the volcano - no visual or text clue, pygmy door location in the nightmare castle, some boss patterns, make sure to get all 14 hearts before trading in the charmstone in the hidden purapril shop (otherwise you'll just get a big heart from heart container chests in other places and you'll have to grind for 500k (!) to get the magic he has)),


Notes:
In the JP version, dying would let you start over at the last inn you slept in (costs the same as staying at the inn, yet works even with no money in your pockets)