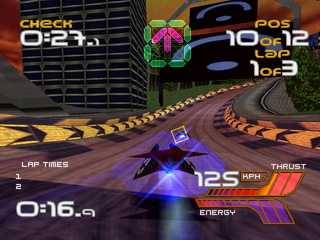 
*A couple of courses into Phantom challenge mode
**1-player, Normal/Arcade

​
+ See Wipeout 1, somewhat tighter controls and more forgiving speed loss when hitting walls (can also just scrape against walls which has much of less of a negative effect on speed) - the latter is still pretty severe compared to most regular racing games though, very good art direction (no cartoony portraits here as there are no driver characters, nice menu design), decent intro (modern aesthetics), skippable bootup logos and intro, first and third person cameras (only one TP angle though), pretty fun courses overall (some branching paths, hills, jumps, tunnels), button and audio configs (can still change the music track during a race), pretty solid framerate, pretty good sense of speed with the boosters, save feature (nameable slots), some new weapons (temporary auto-pilot (also boosts speed a bit if you were going slowly before use), quake/groundwave attack, blinding bomb), shows car stats when selecting your car, can discard a power up here, more colorful visuals (also adds some weather effects though the thunder can be a bit distracting), can get destroyed and destroy other cars here? (recharge HP near the beginning of a course like in F-Zero), temporary shield power up, unlockable hard mode (phantom challenge)+8 tracks+very hard mode (piranha)+hidden ships+machine gun (have to get first place on every course - can also use codes in the password menu though), better draw distance (some pop in here and there still)
better sound and texture quality than in the other versions? (faster, smoother and better looking than on SAT)

+/- ~8 seconds of loading before each race and ~14 seconds when booting up the game, randomized power up containers (adds an element of luck to winning which can be big or small depending on what you get and when - sometimes you get a streak of auto-pilot power ups and win a race because of it), can't carry more than one power up at a time, need to use air breaks before curves for them to be effective (breaking is split into separate breaks depending on direction - pressing both makes you break very quickly), red bull ads during loading screens and races, have to come first on every course to complete a mode, sometimes very unforgiving and sometimes very forgiving hit detection, can turn off all power ups but not individual ones or weapons only

- No course maps during races=more trial & error (need to learn the courses pretty much 100% to beat hard/phantom courses), link cable only 2-player mode, no tournament mode at first (have to go back into the menu after each race to switch to another course even after getting 1st place in a course) - when attempting the hard mode/phantom challenge it suddenly works like a tournament mode (except you have to always come first to complete it) so why not here too?, only six tracks by default (split into pairs based on their difficulty), short invincibility time after getting hit means you can get pummeled if unlucky, getting shot right before a jump, some other trial & error (figuring out the power ups (vague icons), you can get through some seemingly hard parts while holding down accelerate almost throughout as long as you stick to exactly the right path, no rear view mirror or camera angle (you do get a warning from the announcer when someone tries to attack you though)), no replay feature, somewhat lacking feedback from bumping into other cars, lacking feedback from the announcer when reaching or losing first place/winning or losing a race, hitting a cpu car with a shot and then bumping into it is still better for the cpu than for you (same with boosting into opponents), super sluggish save menu, occasional frame drops, the PS1 version supports analogue control only via the optional Negcon twist controller (the SAT version has official support for it), pretty bland cutscenes when finishing a mode (just text against a flashy background animation), too frequent turns and some blind jumps on the unlockable courses, the "we have explosive" music track is kind of annoying and so is the countdown sound when you're about to run out of time (doesn't happen much until the unlockable courses though), ​
? W1: using a boost power up at a ramp can make you go off course and get picked up by the robot (that normally picks you up if you fail the jump - would've been more fun if you could jump really high and only get picked up if you land off course),
no night time versions of the tracks? (rapier tournament in W1)?


Notes:
-XL/2097 differences: "The NTSC version actually has a faster frame rate. Wipeout XL runs at 30 fps compared to the PAL version's 25 fps, something the FRAPS counter confirmed for me whilst making these. 5 fps difference probably doesn't sound like much (and it actually doesn't seem that obvious in the split screen comparison here - I'm not sure if this is because I rendered the video in 60 fps), but when playing you can  really tell the PAL version seems just that little bit more chuggy. Apparently, the craft physics were tweaked a bit more in Wipeout XL as well to make the ships a tad easier to control."; https://www.youtube.com/watch?v=ZJGBUlbEpdU
-Apparently the EU ver. is also harder overall in terms of track design
​