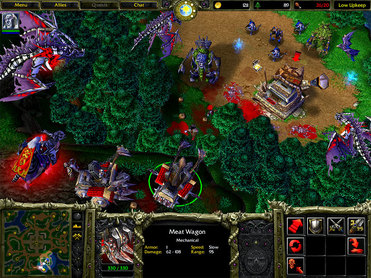 +/-
Heavily stylized art style (sometimes reminiscent of Lego and the muppets)
Less focus on macro/economy (you still need to spam farms though)
Upkeep mechanic (army costs maintenance, adds another layer of strategy - to steadily build from the get go or go for a higher tech economic build and then getting the army, meant to also keep players from turtling)
RPG elements (heroes that level up through combat, gain spells/skills, buy/sell items, have a limited inventory) - you can win games almost solely by using your heroes well (a team can survive as long as one player has a building left)
Tilted/zoomed in camera (you can tilt it down and rotate but not upwards) - somewhat worse overview of the action
Fixes some pathfinding problems while adding new ones (units quite easily get stuck on eachother when you need to pull a single unit away from or towards the enemy), resurrectable heroes, pretty depressing Human campaign, plenty of pop culture references tossed in for the unit dialogue, on rails SP - player has no influence on how the SP story unfolds are larger scale tactical decisions (such as which area to attack and when), goblin land mines are very strong and destroy buildings (can be exploited in SP)

-
Pretty cliché and cheesy storytelling (in-game cutscenes have a cartoon or even puppet show feel to them, characters talking to themselves, uneven voice acting (most human villagers sound really exaggerated), obvious bad guys who explain their plans to the protagonists, gullible characters, Arthas turning to darkness is too rushed to be convincing, sloppy exposition where the characters act stupid, etc.)
Skeleton archers not affected by Holy Light spell
Some fog of war/line of vision oddities (you sometimes need to stand right next to a bg object for it to be illuminated)
Invincibility (Arthas) is overpowered in SP
No ship combat (added in Frozen Throne)
Some dissonance between in-game cutscenes and what happens in the actual gameplay (for example humans can build bridges in them and there are human ships but no buildable shipyards), plot oddities (Night Elves ambushed by Undead, then later trusting Illidan to go on his own to the corrupted Felwoods), some annoying voices (Goblin Zeppelin), Mannoroth (silly and dumb), sleeping units still respond vocally to orders, the enemy AI in SP is sometimes very bad at reacting to your attacks (not helping allied bases, having units next to a tower that don't react to you shooting the tower) - you also can't make allied AI's send units from another base to help you out, NE Chimera never introduced in SP