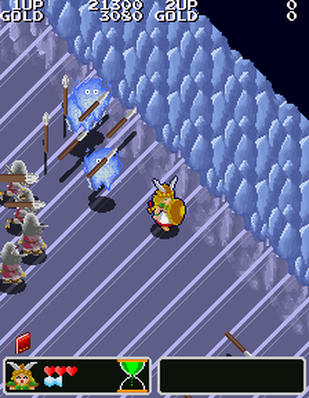 
+
2-player co-op (second player plays as Whirlo from the SNES game)
Alternate paths through levels
Some RPG/Adventure elements (NPC encounters (not sure what they say - in the third level there's a quiz that can kill you if you answer A or C and at the mammoth you get sent back to the beginning of the level if you answer C), shops (weapon upgrades, health), rescue NPCs from mini-bosses)
Attack upgrades
Magic inventory (hold attack and press d-pad to cycle through spells)
Impressive YM2151 music, good art direction overall, Good use of scaling effects overall (giant/big spell, bouncing around high above ground in the castle segment, in-game intro where you jump down from a cloud, platforming segment high in the sky, lava cave boss, etc.)
Some interesting spells (create mini-clones of yourself that act like gun drones in shooters - can fall down pits)
Decent cutscenes between levels (text and pics with minor animation - can skip these on a per pic/paragraph basis)
Can block some projectiles by hitting them with your sword
Very good variation
Difficulty options (4 levels (represented by letters A-D in the options menu (rank), starting HP (2-5), coin worth (up to 9 credits per coin), type - not sure what this does),

+/-
Time limit on coin collecting after a boss fight and on weapon upgrades (similar to Fantasy Zone except there's no inventory and each upgrade will have to run out before the game switches to the next one - last levels would've been better balanced if there was a Permanent weapon upgrade you could buy or if there were more shops there)
Some delay when attacking (can be somewhat of an issue when attacking and retreating/kiting)
Very limited mid-air jump control (some tedious platforming later on where you get sent back to the beginning of the segment if you Fall into the deep water, you can turn around very quickly though)
The shield is just there for show?
No strafe or dodge moves (two of the spells are pretty much smart bombs plus there's the blocking, however with the limited MP later on it becomes a problem)
Can move while attacking
Can only buy one thing from each shop
MP is pretty rare
Can't attack while in shallow water
Some spells are missable (smart bomb, giant/big, )
Respawn on the spot (it might’ve been better to restart at the beginning of levels or at checkpoints to get another shot at shopping or finding some spells)

-
Some control issues (get knocked down for a sec every time you get hit, holding attack and jumping around can make Valkyrie put away her sword when it should be kept out (very minor as there's no reason to hold it out while jumping around))
No HP or MP restore after beaten bosses or lost lives (makes the last levels really hard if you didn't save up on MP)
Trial & error (need to use spells to avoid damage in some situations, boss patterns, picking the best path through a level, usually can't backtrack in a level to grind for more money)
Inconsistent spritework quality and shading style on some sprites (for example your avatar has a black outline while most enemies don't)
Coins can end up stuck in walls or fall down pits (it's also a bit annoying how they'll bounce away from you after being dropped by enemies)
Shops disappear when you exit them
Somewhat tedious electric trap boss
So-so final boss (takes way too long to kill, simple pattern, drops coins that then disappear immediately)

​
Notes:
-Arcade version not yet translated to english (has been translated for Namco Museum Vol. 5, the TG16 port has been fan translated but it's a pretty stripped down version)
-Mammoth: A=boss fight, B=sliding puzzle (very short time limits), C=sent back to beginning of level