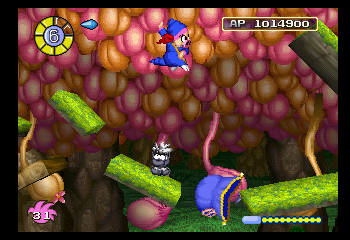 ​
​+
Action adventure/RPG elements (lots of sidequests, interconnected world, gain new moves and weapons, upgradeable health bar and movement speed - very fast movement when fully upgraded, very interactive environment overall (can also examine inventory items though the descriptions aren't particularly useful), some JRPG-like TD view areas, experience system although it only affects if you can pick up and use the three elemental gems or not (and they're not needed though the fire one helps in the jungle)
Goofy and charming atmosphere
Double plane/2.5D gameplay (Revenge of Shinobi/SMW-style, can move between the fore- and background in various spots as well as climb some background walls)
Teleport items (the one-use wings let you go back to any previously visited area and the bell takes you back to the old man's hut) - there's also a flying dog which you'll get help from later on and which has the same function as the wings and can be used freely
Many secrets
Great sound fx overall, basic quest log (doesn't help much for the most part though as the descriptions tend to be short and vague), can check the world map at any point (unusual in that it's fairly zoomed in on the current area and vaguely shows its paths as well as most save points and path crossings, can move the cursor around and check area names for any visited areas, the map doesn't show where locked chests or quest givers are though), some cutscenes are interwoven with in-game events, pretty nice cartoon cutscenes overall (the mix between CGI and drawn animation (and some pasted in photo elements?) and the fluffy shading style is a bit offputting though), charge attack, can use the run move to jump further and higher from standing or climbing position, can speed up text on a per sentence/message box basis (can't speed up the quest given and quest completed text though), some innovative mechanics (in some sub areas the perspective can rotate 45 degrees at certain points (similar to Fez), the bridge that lowers/crumbles as you stand between the poles in the dwarf forest, the forest area where eating a "laughter" mushroom makes platforms rise and eating a "crying" one makes them lower along with making the flowers here change mood as well, can climb some platforms at a higher than 90 degree angle (almost upside down), the boss fight with the spinning wheel obstacle in the background reaching into the foreground) and abilities (the grapplejack - weapon+grappling hook in one, the wind power - hover jump and double jump), great grappling hook physics overall (somewhat glitchy when swinging into certain objects), dual shock support with toggleable vibration, nature restoration theme, can escape from boss battles,

+/-
Frequent save points (15 slots per card, shows current location and some stats)
Unlimited inventory?
Can grab and throw regular enemies (works kind of like in Klonoa except you have less control over the throw here)
Can't move while attacking or charging (only turn around and jump, breaks flow a bit)
Extra lives system is a bit redundant in a game with frequent save points
You get more AP points (used to unlock AP boxes) by finding quests before finishing them - some like the chicken collecting in the first area can be done before getting the quest to do so, ~10 seconds of loading between the main areas, can't manually ask any NPC about quests relevant to the area they're in (makes getting relevant tips take longer), TD view segments (towns and some other areas) are much less interactive overall in terms of the objects in them, can't toggle the "stone"/super fast form gained from the mysterious mushroom on and off (it's a bit too much for some platforming segments) - have to die to remove the effect, later on there's a shortcut to leveling up your three elemental gem abilities (lure a certain fish in certain ponds using fish food), generally lighthearted and sometimes comical tone (silly (some fart jokes), slapstick, bizarre, sometimes ironic - Charles the monkey acts more civilized than Tomba), can restore your health by reloading a save, partial control config (only the face buttons can be remapped), can't access the item menu while in mid-air, can't move between screens in mid-air (have to be moving on the ground), some boss gates appear near the beginning of an area rather than at the end of it, can't toggle the umbrella (hover jump) on/off while in-game - not flexible enough to press down to fall faster as the effect is too small, several chests are placed in mundane spots without a platforming/exploration/puzzle/combat challenge leading to them, two racing mini-games (not that good though - first one which is on foot is very easy, second one is super hard unless you use an exploit), 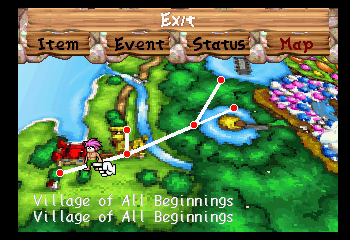 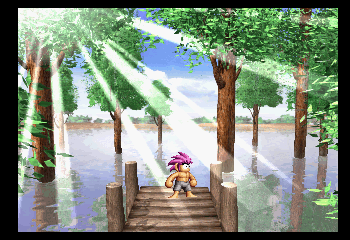 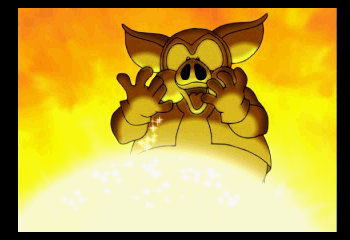 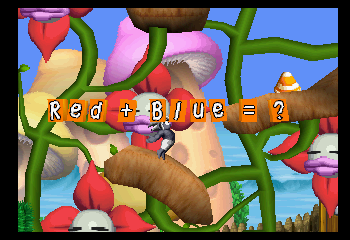 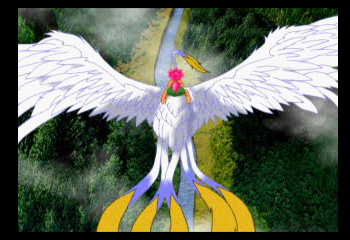 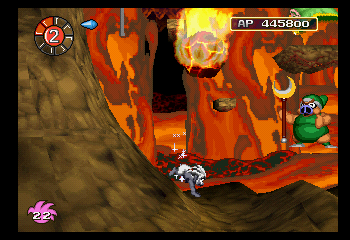 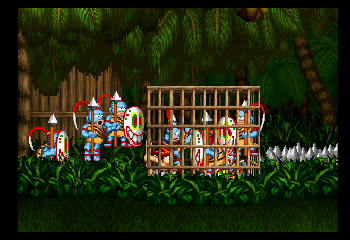 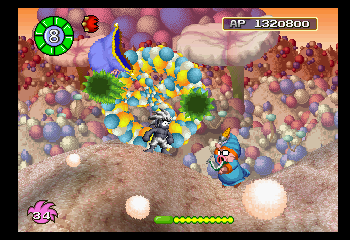 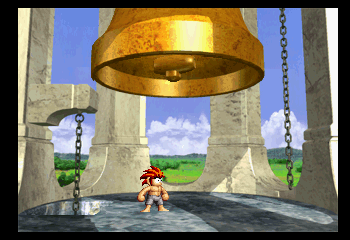