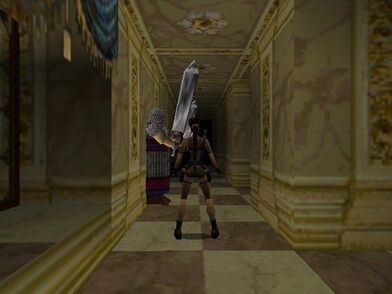 +/-
Somewhat short draw/viewing distance indoors (horizons become black) - sometimes adds to the atmosphere and feeling of isolation
somewhat exaggerated voice sfx when perfoming acrobatics or taking damage
have to manually draw your weapons
linear structure (the game is made up of separate levels with one goal/exit each)
fairly large exploration-based/maze levels (find keys or switches to progress)
save anywhere with multiple slots - really helps with tedious platforming segments but makes the game a lot easier as well, some delay when jumping (see PoP, Another World etc.), auto-sliding down slopes, can't choose not to kill enemies and animals, can't eat animals, female protagonist (cartoonishly sexualized body, strong and independent behaviour, comes from a rich family), need to check Lara's head to see if she's targeting something (though it would go against the minimalistic UI it would've been useful to be able to turn on targeting boxes for targeted enemies or have the game lock on with the camera like in OoT), can't crouch nor crawl, unlimited ammo for the default weapon, fall and crash damage (you die completely if you fall something like 10x Lara's height), one can occasionally see items through walls, can't punch enemies, more of an action focus than in the prequel, levels don't feel like real places for the most part, one hit deaths from fire unless you can find water, some unavoidable damage (guns hit instantly, countered with a lot of med packs), no knockback for enemies nor for Lara, in-game gfx settings and fps display (F1-F4, better to use the setup though), can look around while moving and shooting but not keep steering Lara while you do,

-
Still no maps
slow sidewalking and shimmy (sideway climbing) controls
slow surface swimming
very slow block pushing
the scooter breaks too easily
​limited jump controls (somewhat unresponsive jumps (simply touching the button quickly won't always register unless you were already running), fixed jump height and length (can steer a bit in mid-air though) - the latter generally works well with the platforming segments though), somewhat stiff (partly hitting a wall or object when jumping or swimming stops Lara as if you hit a wall in front of her with her entire body) and at times buggy hit detection (try jumping forward when standing in front of an object or wall, the fire at the end of level 1, enemies can sometimes move through opened doors, the dragon can move its head through giant pillars), somewhat slow turning controls and you can't flip while staying in place, can't adjust the camera angle properly in some situations, can't look down in mid-air (could've been solved by either letting you do so if you were already moving when the look button is pressed while keeping you in place if you stood still before pressing the button or by using the twin analog controls), the game is too picky about positioning when pulling switches/picking up items/grabbing onto bridge ledges and the ziplines (breaks flow), sometimes can't grab onto and climb even a slightly angled ledge while you can stand on other angled ledges (the awnings in level 2), lots of dead space (and you can't sprint) and some dead ends, no difficulty options, can't replay beaten levels or move backwards from the current level to the previous one, can't cancel animations caused by falling longer than Lara's height or running into a wall, can't examine stuff like the computer at the end of level 1, some trial & error (sometimes the game won't properly show the effect of pressing a switch, wreck level trap door floor switch, avoiding various traps - level 1 has a long string of traps towards the end which are very hard to pass on your first try, some secrets, hard to see that you can climb on the book ledges, hard to spot certain small switches, enemies in narrow spaces or appearing right after you jump to a platform or as you're swimming towards one, some points of no return), no reward for the opera house boss fight since your weapons get stolen, some tedious segments (too many tight jumps, multiple switches in a row, parts of the opera house level, long ladders, too many block puzzles in the wreck level), no invincibility time, overly harsh hit detection around some objects and in tight spaces when jumping, some backtracking (level 3, ),