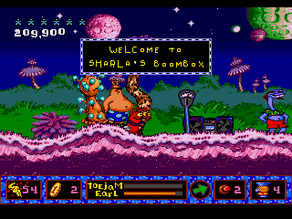 +/-
Semi-homing jars (triggers if you throw them to the left or right and the enemy is above or below the trajectory)
Unlimited jars
Some delay when attacking
No phones (sort of replaced by buttons on poles which trigger various things)
Can't interact with some of the funkotronians
Can't use the teleport move in mid-air or in water
Can't steer left or right in mid-air if you fall off a ledge
Can't throw jars off screen horizontally but vertically is fine
Time limit on jarred enemies until they get out (about six seconds, all health is restored)
Fairly easy to rack up extra lives
No bosses, long levels overall

-
​A bit slow (more of a collectathon - need to collect all the earthlings in a level to be able to go to the next one, slow jumping and bouncing, somewhat slow movement acceleration, jumping lowers your movement speed a bit if you're at the maximum)
Can't go back to previous levels (to find hidden areas and NPCs)
Some control issues (scrolling stops working when using the teleport move
Can't use the vacuum unless you're standing on the ground and not being knocked down or using the panic move
Very short invincibility time
An animation triggers when picking up jarred earthlings unless you jump onto the jar - no invincibility time during it
Can't keep dropping jars from a ledge after placing one on the ground (it disappears after a few seconds though)
Can't jump or dodge out of a throwing move - annoying because of the relatively long delay)
Repetitive (starts repeating backgrounds and enemies after a few levels, stops introducing new stuff after level 11 or so)
Less replay value (no random levels though present/trap/earthling locations are somewhat randomized)
Missing some mechanics from the first game (like split screen), smaller inventory and fewer presents (most presents contain points (which give you extra lives but still), can't keep super jars for later, only three items in the inventory (including funk power which is used for scanning and dodging; no beat box, no dummy doll, no icarus wings, no mail order, no un-fall, no rocket shoes, no food that can be kept for later), no level maps, some tedious elements (can't reach for air near water surfaces unless you're at a spot where you can jump up to land, some backtracking (level 8 - otis, la place du funk - bubbles over water segment), falling down and having to redo segments, some enemies take too many hits to kill or like to move off screen and hide, coin machines that trigger other coin machines several times until finally triggering a hidden item or path, attacks (vacuum, cow ghost) that trigger long animations are annoying after the first time), some trial & error (press down + jump to jump higher, can't always teleport through walls where it seems like you should be able to, some leaps of faith (can't look down/up), presents found in the background can sometimes fall into walls, various mechanics, hyperfunk zone), no sneaking/no santa, no clerk type NPCs?, enemies no longer hit each other?, the soundtrack doesn't take full advantage of the hardware (general lack of echo, psg, and dac), no super jar counter, cheap hits from cameras, no sense of climax before reaching the last of lamont's favorite things or before the end level

​
Notes:
-15 levels
-beat the hyper funk zone completely six times to get unlimited super jars
-no high five (press A simultaneously to even out both players' lifebars in 2-player mode)?
-no level up system?