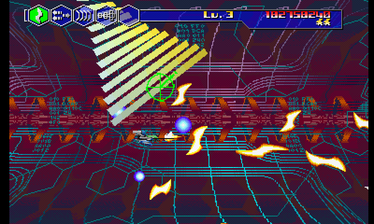 ​
​
​+ Warning boxes show when enemies attack from unexpected directions (several other hard to avoid attacks aren’t hinted at though), choose your path for the first three levels (four in TFIV), difficulty options (training-hard) and control+audio options,  some cool perspective-effects (only during in-game cutscenes though), pretty intense and varied action, unlockable content (artwork, ), mini-bosses, very good bosses overall and some great ones (guardian’s knight, second to last boss), decent cgi cutscenes overall, get to fight the Rynex ship at one point as well as a mecha-style upgrade of it, save feature (auto-save), new charged beam system (collect up to 3 “Craw” drones – these serve as fuel for the Over/upgraded version of a weapon’s attack and after wasting it you need to wait a bit until they recharge or collect another Craw power up; these drones can also absorb some enemy bullets), weapon inventory, respawn on the spot (lose one weapon level and the currently equipped weapon,

+/- Somewhat few weapons (7 with the temporary upgrade in level 5 though one of the temporary ones is basically the Over version of the first weapon -  however the Over/Craw alternate fire mode (square button) adds some depth to each one), only three continues (normal), strange ending (the AI that went out of control (also the final boss) sort of lectures you on how to avoid war happening again) with blurry/pixelated text, first two weapons are upgraded permanently after the fourth level, some enemy bullets can be destroyed, one level and one longer segment in a level play more like R-Type (slower paced with more environmental hazards), the Craw drones can be destroyed when red/their energy is depleted,

- Sometimes cluttered and saturated backgrounds + enemy bullets that blend with them (unfortunately happens during the final boss fight, the reverse beam/free range is also kind of distracting visually and sometimes the white boxes around some enemies are as well), trial & error (100% speed isn't quite fast enough sometimes fast attacks, later boss patterns), early bosses go down too fast when using charged beams, boss intro text messages go by too fast, easy/training only goes to level 4, somewhat uneven framerate, some slowdown, some odd color choices, somewhat cheap-looking menus (especially the clear level screen) and ugly fonts, some dated looking effects (pixelated explosions and water, sometimes odd looking in-game cutscenes where the perspective changes and your ship is still movable), pretty short first level (water level), sometimes uneven difficulty (third level boss (the transforming tank) is pretty tough), some sfx are somewhat muffled and compressed and the free range sfx is a bit annoying, the wave shot (middle weapon) is somewhat weak and the Over versions of the back shot and free range shot weapons are a bit OP,

​
Compared to the Saturn version:
+ "SAT version has some terrible frame skipping (not slowdown, frame loss - frame loss is a lot more annoying)"?, slightly muffled sfx on SAT, longer and better intro and ending cutscenes on PS1, story text and 3D boss model viewers on PS1, /Fighter17, SHMUPS.COM, Shamrock99
+ PS1 version has an extra mode (Boss attack), art gallery, better textures for the polygonal models, unlockable ships
+ The free range weapon is much less powerful against bosses on PS1 (compare the level 2/woods boss for example) whereas it takes them down in seconds on SAT

- Score system mangled on PS1 (not sure how) /Icarus, SHMUPS.COM