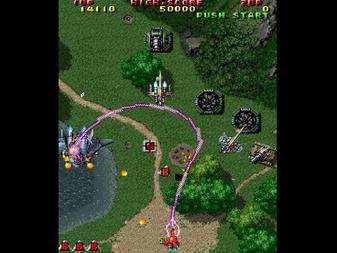 + (Raiden 1) Plenty of options (gui, tate, difficulty options (v. easy-hard), button config, original or remixed OST (pretty cheesy sounding midi but it's nice to have better drum samples)), 2-player co-op, frequent checkpoints (after using a continue) + post game over assistance (if you die several times you'll get a P power up (fully upgrades your ship), two sub weapons (semi-homing or high damage), satisfying bomb and explosion sounds, good bosses overall, screen also scrolls sideways a bit (unfortunately a bit loosely so it can lead to unfair deaths), air and ground enemies (your weapons hit both), somewhat destructible scenery, mini-bosses, pretty intense action in the last levels, fairy power up (hard to get (?) but gives you back some of your power ups after death)

+ (Raiden 2) Easier to recover after death (the ship drops a couple of power ups), improved spritework/colors/background detail/animation, 2-player co-op, very intense action, more interesting bosses and they don't go down as quickly to close range fire, one new weapon (homing laser) and bomb (spread), original bomb covers more ground here and triggers slightly faster as well, improved variation, somewhat cleaner and louder drum samples + better FM sound design overall, P power up is still there and so is the fairy (hidden somewhere in the background of some stages), difficulty options (v. easy-hard - much slower enemy shots on easy), "fusion" mode (combo spread attack in 2-player when one ship is placed right above the other)

+/- (R1) Power ups move around on screen for some time (can be distracting, shorter time for bombs), limited continues (9; there's a code for free play though - hold all four main buttons at the credit limit menu), the game continues in the same area after a beaten boss (just showing the score in between levels; similar to Truxton and other 80s shooters), respawn on the spot (default weapon but you do get three bombs), shrapnel from your destroyed ship kills nearby enemies, higher rate of fire the closer you are (means you can kill some bosses very quickly if you get up close), hard to gain extra lives (need to get a high score), last levels borrow from Truxton (setting and enemy formations) and Hellfire (the music), no shield or HP upgrade

+/- (R2) Faster ship but the enemy bullets are faster as well, still limited continues (9), much harder levels (feels like level 7-8 from the first game by the time you enter the third in RII), the debree from enemies takes some getting used to at first, game continues in same area after beating a boss, respawn and continue on the spot, no shield or HP upgrade, purple laser obscures enemy shots, player 1 controls the camera

- (R1) Trial & error (boss patterns, some enemy patterns, some flying enemies can be flown through, some shots can be destroyed), no speed upgrades, only two main weapons (spread or high damage) and two sub weapons, no weapon inventory, muffled and low volume drum samples, some relatively long pauses during levels and after bosses, pretty repetitive backgrounds and pacing (enemy variations starts off great but gets repetitive towards the end as well), sometimes bland and primitive sounding original (FM) music (most of the compositions are pretty good though), some delay when using bombs (means you need to know when to use them against for example certain boss attacks), hard to recover later on unless you get a P power up, loops directly to the next difficulty (past the ending) until you beat the hardest mode?, repeats some music tracks, somewhat bland backgrounds and colors overall, mostly generic looking regular enemies

- (R2) Trial & error (see above, some shots can be destryoed while in "fusion" mode), no speed upgrades, no weapon inventory, muffled drum samples and some explosions sound like they're clipping (not a PS1 port issue), still hard to recover later on unless you get a P power up,