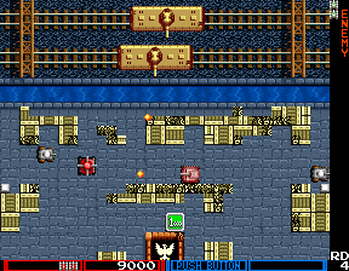 ​
​+ Basically a sequel to Battle City (destroy all enemies while protecting your base, single screen levels, destructible walls), 4-player co-op (with a minor vs. element in the score ranking), some interesting weapons and power ups (shoot through walls beam, temporarily invincibile base walls, in a few levels fuel tanks can be blown up to destroy nearby enemies, time stopper - SMB2?), temporary shield/invincibility power up, temporary mini form transformation (makes you small and fast like in NSMB DS), fairly impressive music (YM2151 only - could've used samples for stronger percussion though as it does have some sampled sfx), can destroy most enemy shots by shooting them, difficulty options (F2; four levels, number of lives, credit worth), more entrance points for the enemies (this time also in sideways) means that you can't spawn camp like in Battle City, pretty fast and intense action (the intensity tends to peter out at the end of a level though), can't destroy your own base or its walls here, smart bombs (in the form of air strikes - fairly rare and they trigger when touched though), adds bosses (pretty simple but they add a space invaders-like element to levels in that they'll wear down defensive walls), decent length (36 levels/~45 mins in 1-player if you're great at the game), shows number of enemy reinforcements left,

+/- Power ups disappear after about 10 seconds, no permanent speed upgrades and no HP upgrades (only the main weapon is upgradeable and not by much (two bullets at once, three levels of strength?) - upgraded bullets can destroy steel walls), temporary weapon and shield power ups (pretty short limit but they do carry over to the next level at least), can't strafe nor move backwards while shooting forwards, small sprites overall, a bit hard to rack up extra lives, can increase your rate of fire by moving in close to an enemy or object (can shoot again right after the shot disappears, Gradius?), no auto-fire, can hit but not damage your allies (they'll get knocked back slightly though), more enemies in 2-player mode and some are stronger but it's still easier since you can cover more ground, some 8-bit style sfx and instruments, features two cameos from other Namco games (a Pac-Man themed level, a level with dig dug and pac-man tiles on the ground, could've had a couple more!), somewhat unforgiving hit detection

- Uneven difficulty due to random elements (which power ups you get and where they spawn - sometimes you get a great weapon or 1-2 air strikes at one point in a level and sometimes just points instead, how enemies move), a bit repetitive, missed opportunity to let the player choose their own path on the map in-between levels, becomes a lot harder after about 10-12 levels and it can be hard to recover later on in 1-player mode, no weapon inventory, you'll keep getting main weapon power ups after being fully upgraded, no level editor, a giant tank power up would've been fun (might've also been fun to let the player deploy defenses before or during some levels such as blockades or mines), fairly basic visuals and somewhat grating music at times, kinda lame ending
​