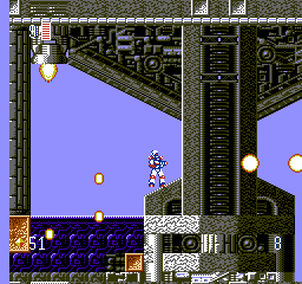 *Final boss in the Plus romhack

+ Hidden and off the path items (usually rewarding to get with a bit of a challenge before them in the form of enemies or hazards), 360 laser, smart bombs, decent variation overall, mini-bosses, sometimes good art direction (some environments and bosses - transformers inspired), mixes in shoot 'em up-like vertical scrolling levels where you have a jetpack (where you still have a health bar), some large and detailed sprites, some interesting gimmicks like destructibe walls, some cool bosses (the fist, in theory the "drill/antlion" machine boss/lvl 2 boss), shield power up (lasts longer than before), some nice visual details like the weather effects, some hidden paths in walls? (mostly a case of trial & error if you find them or not though), Diddy Kong/Mega Turrican style rolling ball jumps are possible here (and made use of in the level design), improved scrolling and resolution compared to the C64 version, adds some invincibility time after taking a hit, somewhat remixed levels (somewhat better at times (no more tedious destructible floor segments in the second area, replaced second boss), shorter loading between levels (~5 seconds; might not even be loading but you can't skip the screen), no more issues with the camera scrolling too far up when jumping over large pits, enemies and items no longer disappear as easily if they move off screen or you scroll the screen away from them (was annoying when you found an item and it disappeared because you jumped or had to avoid a hazard, could make some parts a lot easier if you just move back and forth to make things despawn), music + sfx throughout and you have mines in ball form (unlike on C64), features the bouncing laser shot (makes the 360 laser near redundant in tighter areas), temporary invincibility+screen covering attack (b+select, once per level?), shorter lvl 3-1 and they removed the wall builders from it (would've preferred a less cheap scrolling level though), better hit detection near roofs, slight knockback after taking a hit was added (adds to the immersion), new bosses in the final level (kind of easy though),
Plus hack: fixes the loose horizontal camera and rearranges the button layout (start to roll and jump to cancel, select to activate smart bomb, b+select to active temporary invincibility), somewhat improved player and gem sprites, keep your weapon's level if you die at the final boss, you can no longer stand on the final boss's head

+/- Unlimited rolling ball, invincibility while rolling (and no time limit?), can't move while crouching, jump control takes some getting used to (immediately fall down after releasing the button), fairly large maze-like levels (some backtracking here and there), smart bombs get blocked by walls and platforms, fewer and/or harder to find extra lives (it even seems like some where removed leaving those areas empty instead), no overall time limit, borrows gameplay elements from Contra (jump and spread shot)/Metroid (rolling ball and exploration)/Gradius (shooter levels), no separate button for the 360 laser (not a problem in Nestopia), no weapon inventory, starts out pretty tough and is harder overall than T2, smart bombs were nerfed but you now get several blasts per bomb (each is triggered manually) - makes it a bit easier to safely hit smaller flying enemies since you get more tries per bomb, levels are a bit smaller than on Amiga and some mini-bosses are missing, faster falling speed than on Amiga, third area is no longer a scrolling jetpack level (worse since you now have to fall back down if you fall off the upwards only moving platforms and they can also despawn off screen but at least it's easier to react to some hazards), alien lair area looks and plays more like in Turrican 2 (4-3 is almost exactly like the finale in Turrican 2 on Amiga), life refills between levels,

- No more respawning on the spot and no checkpoints, tedious platforming is still pretty common (jumps are more vertical based like in Contra and there are some very tight spaces to jump in, sometimes you can fall down and have to redo large segments of a level (especially in the last area), see upward scrolling), harder to hit the wall turrets with smart bombs?, a few dead ends with nothing in them, no boss health bars, can't swim underwater and there's no change in the physics, leaps of faith and somewhat loose upward scrolling (like on Amiga; can't look up/down - also means you sometimes can't use the 360 laser to shoot enemies below you) - worse than in Turrican 2, spike traps in the second sub level don't retract so it's much harder to reach the northeastern part, the 360 laser forces you to to stand still and it takes a second to activate plus another to aim (breaks flow if you don't have the bouncing laser weapon), somewhat weak sound design for the music, power ups still tend to spread out a lot when popping out of blocks (worse with gems since they don't float), no voice samples, somewhat basic boss patterns, somewhat bland and colorless environments overall (better on Amiga), cheap hits/deaths here and there (the bombing planes and flying red mushrooms, some traps in tight spaces after falling), trial & error (can't do the dkc-style jump from a moving platform, finding some item stashes through leaps of faith, boss patterns, shoot 'em up/third level, some traps, leaps of faith), very short lvl 3-3, some enemies in lvl 3-2 take too long to kill considering their patterns, lvl 3 boss goes down a bit too fast, somewhat unfitting music choice for the first alien lair area, repeats stationary turrets a lot,
so-so final boss (especially w/ the laser weapon)?, red turret shots blend into the alien lair background, lame ending (no escape sequence),
Plus hack: The final boss is way too hard and since it's in its own new sub level you can't switch weapons once you've reached it, can't be moving left or right when pressing start to roll or it won't register, can't pause the game (less of a problem in emulation)