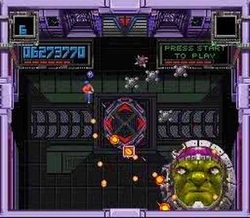 +/- Stereotypically aimed at men (collect bikini babes as a power up by reaching the hidden 'pleasure dome' room, no playable female characters),

- Overly resilient bosses, very repetitive, randomized power ups and power up spawning positions (can lead to much harder or easier parts depending on what you get, power ups ending up under bosses so you can't reach them), somewhat inconsistent hit detection, final boss is very similar to the first one, hard to spot the shrapnel from the fat exploding enemies, score/life counter gets in the way somewhat