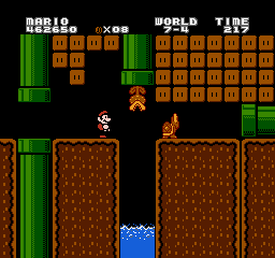 + Great presentation with a couple of new sprites and music tracks that blend in well, completely new levels throughout, all assets are put to good use (only the vines felt somewhat underused, I think they were in only 3 levels total), new physics allow for a ton of bouncing around on enemies, which is fun but has its problems (see below), changed boss behavior for Bowser (who you only meet in the final level here), hidden item blocks, see SMB1 for more

+/- No lives is a nice change of pace but at the same time removes the joy of finding hidden 1-ups (of which there aren't any), some power ups like the stop watch are a must rather than an optional to finish the game, unless I'm mistaken there are no bonus levels/rooms (probably since the vines are used differently but they were pretty lame in SMB1 anyway so I can overlook that), special coins (just for bragging rights as nothing is unlocked?), while getting temporary invincibility from 100 coins is generally a nice feature it can be a huge problem in levels with a lot of pits and enemies to bounce on where there are also coins in mid-air, music resets between rooms

- Trial & error (cheap enemy placements, some mechanics, invisible blocks without visual clues), the momentum and air control is still very close to SMB1 while the level design requires a ton of precise platforming on moving targets like flying koopas and bullet bills - you are also required to do this bouncing on enemies under frustrating conditions like short time limits or not knowing the enemy positions before you're in mid-air over a pit and one small mistake will kill you (there's also an overabundance of levels based on this kind of design and was sick of it long before the end of the hack), the change to level goals felt like change for its own sake since jumping flag poles is simply more fun than pounding yet another block from below, the bosses are underwhelming for the most part and consist only of a regular enemy with a switch to stomp right behind them, the puzzle in 8-4 is unintuitive bullshit (the problem is that you need to do the last thing on your mind (*SPOILER* kill yourself in a certain room) to progress and there is no clue for it)