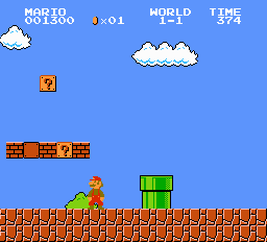 +/-
No continues
can't go backwards through stages
can't shoot fireballs while ducking
can't move while ducking (not really needed)
time limit (not much of an issue)
the backstory is told via the manual, the swimming controls take some getting used to

-
A bit repetitive
no difficulty options
somewhat floaty controls (Mario is slow to accelerate when starting to move and doesn't stop right away when you release the d-pad)
can't turn around in mid-air
can't shoot fireballs when above the status bar at the top of the screen
can't adjust the jump height when bouncing off of enemies (you can actually bounce higher but you need to be going upwards in your jump which is very rarely practical), some trial & error (dangers that you can't react to while running or in the middle of a jump, hammer brothers, the castle mazes), somewhat uneven difficulty curve


All-Stars version (SNES, 1993):
+ Game over/time up and bonus level screens have some nice artwork added to them, somewhat improved ending animation, new animations for the rescued toads, more detailed backgrounds and sprites, a noise lets you know if you're going the right or wrong way in the castle mazes,

+/- Start out with 2 more lives, unlimited continues, Bowser looks like in SMB3