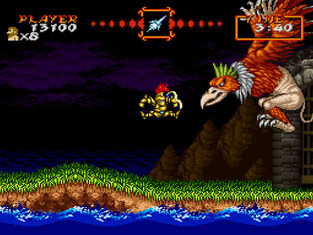 +/- Enemies start spawning in some places if you stand still for too long, some invincibility time during and after special attacks, the scythe special attack (tornado) is pretty overpowered, dropped weapons from chests are randomized and never disappear (can be a problem in one or two spots when you don't want to pick the weapon up),

- Slowdown (you can't even fire your weapon sometimes), extreme trial & error (enemy positions and patterns, traps, boss patterns, finding some chests, the shield doesn't block if you're ducking or jumping (but does block on ladders?)), slow walking and overall primitive controls (can no longer shoot upwards, can't jump onto or off of ladders, can't move while crouching), most weapons are ineffective (or their charged attacks are, for example the axe and the boomerang knife), once again having to find some hidden item to even be able to reach the final boss (need to replay the entire game and stick with that weapon which has no special attack), most bosses are much easier than their levels if you have the golden armor, hit detection is a bit off at times (sometimes unforgiving), inconsistent rate of fire for the lance (two on screen when standing, one in mid-air), some palette swapped enemies as early as stage 3, some tedious waiting for moving platforms and traps, no weapon inventory


Notes:
PS1 and SAT versions: Little to no slowdown, no audio or visual changes