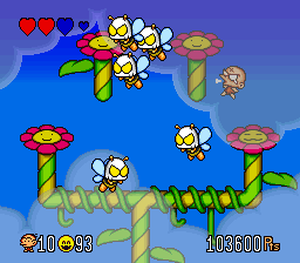 
+ Lots of moves, new transformations (ballerina=double jump, bandit=throw projectiles, frog - grab onto and pull yourself over certain ceilings and eat bugs, mini-bonk=create moving platforms, etc.), quirky humor, hidden items, optional training level (doesn't explain every transformation though), control config (except for l/r), pretty good variation, pretty good art direction overall (expressive character and boss sprites), mini-bosses (very easy though), collected fruits do extra damage to bosses before the fights begin, can still hover in the air by mashing the attack button, move platforms (yellow flowers) around, bounce on water surfaces with the dive attack, wall jumps (one issue though is that you do it by attacking so it sometimes happens by accident, another is the inconsistency - see below), some good bosses (the female boss), some memorable moments (mini-game inside a dino (you then exit through its guts), the pig balloon flying vehicle, the zombie segment (have to chase your own soul/angel through the level - christian parody?), the plot twist where Bonk turns into a dragon that looks like the final boss - only for one level unfortunately, finishing off the final boss with his own UFO), fairly frequent checkpoints, upgradeable lifebar

+/- New bonus levels (mostly OK, pretty boring tank level, hit detection issues with the balloons in the bird level), no overall time limit, uninteractive level map and you can't replay beaten levels, backgrounds have a different and sometimes western style (first level looks a bit like some 90s Amiga platformers), password save (a bit crappy for a 1995 game), transformations are lost after taking one hit, fairly easy to rack up extra lives (100 smiley faces=1 life), can't move while crouching, very short default attack (bonk/headbutt) range, can't look up/down, fairly easy to get hit instead of hitting the enemy if you're mashing the attack button in mid-air, partial life refill after beating a boss, boss gauntlet in the final level (slightly harder?), bosses still hurt Bonk during their invincibility time after taking a hit (very hard to keep bouncing on bosses like in earlier games), very rare mini-form during gameplay,

- Many control issues (can't jump out of the breaking animation when trying to turn around while running, get stuck in the ground for a bit if you dive attack too far downwards, can't put down a flower platform right in front of you or keep carrying it while flipping sides on a thin tube horizontally, running into walls or jumping into ceilings causes some delay while an animation is shown and you lose your momentum, some delay when turning around both when walking and running, somewhat floaty movement, so-so mid-air control, inconsistent climbing controls (kind of tedious when not climbing the thin tube tiles because you can only move a few steps before having to jump and grab hold again - can't grab most walls at all though (only bounce off of them), also can't grab onto the tubes without jumping towards them and can't do spin moves/attacks horizontally (spinning faster and then letting go for longer jumps; vertically you can keep spinning and remain invincible while doing it)), can't use the frog attack and the platform shout in mid-air, vertical based jumps when you're not running (see Contra) - especially after having grabbed onto a wall (apparently you have to headbutt the wall to get more momentum in these situations), can't move into narrow spaces as the worm, somewhat clunky slide (into narrow spaces) move - need some momentum and tight timing for it to activate, can't use the special move during a "about to fall off the ledge" animation), somewhat loose scrolling, can't map running and special moves to the shoulder buttons (unless you're emulating), some tedious parts (some ice segments, some vertical platforming segments, some bosses - the second to last one which flips the floor around (kills you instantly if you fall off the platform)), doesn't show bosses' healthbars, uneven level design, a bit short, no difficulty options, some trial & error (somewhat unforgiving hit detection on spikes/spike balls, certain enemies can't be bonked from below, invisible roofs at the top of some levels, spikes hurt from the side, cactuses are in the background despite looking like they're up front), transformations don't carry over to the next level, unnecessarily slow transformation animation, picked up and put down yellow flowers disappear (respawning where you found them) off screen, can't make Bonk swim faster (dash button?), some cheap hits (chandelier trap, train boss mini-dinos), somewhat drawn out final boss fight and no sfx when his head starts exploding, so-so ending (Bonk gets chased by a random magic carpet which didn't appear during the game), mostly forgettable soundtrack compared to the first Bonk game and the sound quality isn't great for 1995