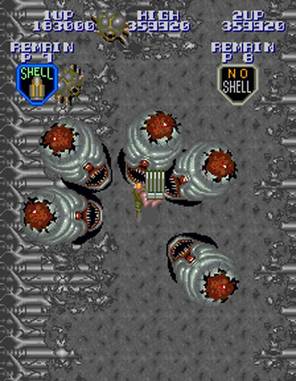 + Top down levels instead of tps/rail shooter ones, 8-way aiming (need to jump to shoot directly downwards), 2-player co-op, large and varied bosses (they're also more resilient here - especially without an upgraded weapon), auto-fire (pretty slow unless you're using the missile weapon though) - on NES you get 1 more bullet on screen at once from a certain power up as well as the missile weapon's auto-fire, difficulty options (4 levels - weaker and fewer enemies on easy as well as 1 extra life per boss and somewhat slower weapon capsules), credit options), respawn on the spot (can be frustrating in the final boss fight), can choose to start with 7 lives without the game reverting to 3 after the first credit, better balanced weapons (nerfed spread, boosted laser - still worse than the others though), improved variation and initially more interesting set pieces, better use of FM synth and there are now solid sampled drums+guitars and some voices, decent intro cutscene, somewhat better use of color overall+better enemy sprites and explosions, pretty intense action, smart bombs (can hold on to them here unlike on NES), more interesting (but also harder) jungle level than on NES, some jump height control (need to press up to jump higher), weapons can be upgraded once (hard to survive long enough though),

+/- While switching from forward to diagonal aiming you can get a few shots off in an angle between them (can be bad if you're using the laser), can't crawl, somewhat slow jumps (good for getting more shots off in mid-air, sometimes bad for dodging) but they're also a bit lower here, no dodge move (can't jump either in the top down levels), no weapon inventory (makes the difficulty uneven), can't jump while in water, can't stand still while aiming like in the 16-bit console games, rate of fire is faster the closer you are to the enemy, for some reason they made it hard to jump over unwanted weapons (they'll disappear after a 5-6 seconds though), you can swim past swimming enemies by crouching when in water but your avatar auto-emerges to catch his breath after just a couple of seconds, some segments and bosses are different from the NES version, no temporary shield power up?, much fewer extra lives than on NES unless you play on easy

-Free play doesn't work (gives you 6 credits - 1 coin/7 credits option also gives you only 6), two levels shorter than in the NES version (second top down level is the final one here), still has auto-fire jump (can throw you off during vertical platforming especially), tate/tilted screen (only good in the vertical segments), still goofy player character animations, pretty much the same control issues as on NES (vertical-based jumps, stand up from pressing back/forward while crouching and shooting), still lacking color choices overall, pretty short though the increased enemy firepower and respawn rate in some parts makes it take longer (at least without the right weapons and in 1-player), somewhat slower walking speed than on NES (but the tilted screen makes it less noticeable), trial & error (the screen pushes you forward before a couple of bosses, boss patterns, ambush attacks, jungle foreground), overly short weapon range in the top down levels, faster flying weapon capsules (sometimes they'll fly in a way that makes them easier to hit though), a bit harder to tell the difference between the weapons before picking them up (no big letters like on NES), kinda cheap final boss (impossible to dodge without the spread or missile weapon?, takes longer to kill than the previous bosses without the right weapon + a smart bomb (hard to get to with both)), no strafing, hard to stop at a diagonal in the top down levels, minor slowdown,