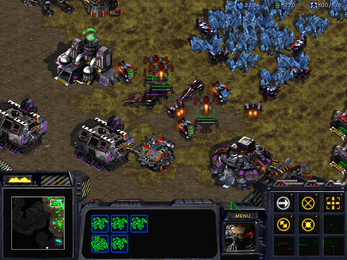 +/-
Overlords can carry ultralisks
reavers and dragoons take up the same amount of space in a shuttle
can't sell units
can't speed up building construction by using more than one worker
always need to start over with upgrades etc. in each new campaign mission (gets tedious at times)
​control groups are altered by the arbiter's stasis ability (can be good for the other player though), waypoints don't work when warping in buildings with probes, can't rally workers to mine resources, no destructible terrain, no water units, no "unit lost" message (or event log to bring up at will), can't tell units to hold and not attack anything?, the computer cheats when it comes to unit control/micro

-
Some pathfinding issues (dragoons in stairs, goliaths, workers getting stuck on each other, slow units like templars slowing larger groups down, reaver scarabs, ordering a spellcaster to cast something on terrain higher or lower than himself usually makes it try to walk to that spot via a ramp even though it should be in range after some forward movement towards the target, etc.)
some interface issues (can't see each unit's energy in the lowbar during a group selection, can't choose to build out of more than one building at once, no "select everything" button (can't select more than 12 units at once) - C&C, can't use specific unit abilites in mixed groups (even when it's just a hero with other units of the same kind), can't build more than one unit at a time per building (could've been an upgrade at least as it would've switched the focus more to tactics than tedious mass production))
the campaign lacks alternate paths and doesn't always respond to your actions when it should (for example if there's a holdout mission and you've killed all the enemies the mission doesn't end and the enemy doesn't get any reinforcements)
some trial & error (sudden attack by the terran general (duke?) in one of the protoss missions, burrowed and undetectable infested terrans in another protoss mission)
sometimes stupid AI player (often doesn't send pre-placed units to help, doesn't unburrow units hit by a psionic storm, doesn't expand or build enough workers during the campaign, skirmish: no build orders, poor economy, slow to expand, etc.)
​no difficulty options for the campaign, cutscenes sometimes don't reflect what you've done in a mission or what you're about to face in the next one, the game is sometimes lacking when it comes to introducing new units and their uses to the player (interruptions would've been annoying but there could've been an option to check new unit info in a menu or something), low volume on some of the voice acting, can't keep playing after getting the victory message in a campaign mission, minor balancing issues (mutalisks without BW, specific map types, scouts are still too expensive), some annoying sfx (siege tank), sometimes buggy hit detection on spider mine explosions, can't rally workers to mine resources,