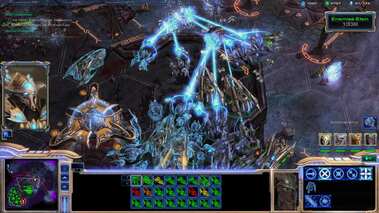 
​+ New P&C adventure style hub between missions (talk to NPCs, hire mercenaries in the terran campaign (elite units dropped in from a new building) which changes setting depending on where you are in each campaign, research upgrades, buy other upgrades - need to consider which ones you'll use as you won't be able to buy all of them) - feels pretty wing commander-like, various interface improvements (toggleable auto-casting (WC3), rally points can make workers auto-mine minerals (WC3) and mining workers auto-spread, tab to switch between unit types in a mixed group (WC3), see and easily select idle workers, shows worker saturation (how many to use for efficient mining), select all army units (F2), group multiple buildings and build from them all at once, can select many more units at once, etc.), optional mission objectives (one pretty cool secret mission as terrans), difficulty options before every mission (casual/easy/normal/hard/brutal), somewhat open ended structure (choose between two missions at a time after a couple of introductory ones (with zerg you pick between two planets at a time but then have to beat 3 missions in a row)), camera zoom and semi-rotation (a bit limited though - can't keep it locked in a different perspective), some interesting mission ideas (lava planet with periodic floods, sacred crystal mining misison, laser drill, day/night cycle with massive attacks at night, etc.), better pathfinding and hotkeys overall (thors have so-so pathfinding), pretty detailed audiovisual options, speed options and other such things you'd expect (similar to assault marines in 40K), breakable boulders and environmental cover (obstructs ground unit sight range), xel'naga towers (scout towers that stay activated as long as you hold them with any unit), some cool new units and abilites (reapers - can jump cliffs and throw explosives, temporarily bury supply depots and salvage bunkers, terran add-ons that can be used by more than one kind of production building, creep expanders (zerg now move faster on creep as well), warp in units in any pylon-covered area with warp gates, zerg unit evolutions, spear of adun, etc.), several SP-only units (most replaced SC1 units make a return in SP) and some MP-only units, pretty nice cutscenes overall (the pre-rendered ones especially), pretty good voice acting overall (some stilted/dispassionate lines), some funny moments and decent us news channel satire, pretty good aesthetics overall, some story/strategy choices that affect the story and which units you can use, more varied and detailed environments (some missions inside protoss ships), SCVs will auto-repair units and buildings that are very close to them, demonstration clips for new upgrades and research (in the zerg campaign the demos come in the form of easy mini-missions where you get to try out each upgrade - here you get one mission per unit which helps the game feel like it's moving forward but still gets tedious when replaying the game as they are unskippable if you want the upgrades and too easy to really engage), vertical space shooter mini-game (it's alright), separate co-op missions mode, multiplayer training missions, each campaign has a different upgrade system (distribute points between different upgrades and pick between three variations on each unit type (can be changed between missions) in the protoss campaign), some cool action oriented boss vs hero fights, pretty cool final mission (goddess/xel naga Kerrigan, amon can tear away parts of the ground with resources on it - eventually removing your economy), message log, improved map editor,

+/- Can skip NPC dialogue on a per sentence basis but not most other dialogue such as mission briefings, several achievements for each mission (several pretty lame ones though), your chosen mission path generally doesn't affect the storyline and you often don't know much of what's coming gameplay-wise until you actually enter a mission (lessening the strategic part though you can always enter a mission and then reload a save from before it), optional tutorial mission (first couple of missions for each campaign still play kind of like a tutorial though), can speed up construction with multiple workers in SP (optional upgrade), no unit scatter command? (C&C), most abilites/spells are now used/cast by one unit at a time when you command a group to use the same ability (generally helps to not waste castings though an extra hotkey to cast like in SC1 when wanted wouldn't have hurt), saving a mission for later doesn't affect its difficulty or rewards or make any missions unavailable (except if you choose to go to Char prematurely in the terran campaign), can't give any orders to units that you're escorting (making them wait or move to a certain location - would make those missions easier but more realistic and involved), easy to get all research points needed to reach the end of each upgrade tree, not all units can be viewed bestiary-style in the armory, can't view your current empire on a map in the campaigns, can't stop hiring a mercenary unit to get back some credits, would've been cool if you saw the other broods that Kerrigan communicates with a bit instead of just the planets being covered with creep from space, no permanent upgrade or unit choices in the protoss campaign, don't get to control more than one species at the same time for the finale, missions don't have constant music playing by default (sometimes just ambient sfx with more cinematic music for certain events and standard music playing for a while at a time) - usually works well though and you can toggle it to have continuous music, no water units, can't tell units to hold and not attack anything?, cutscenes focus much more on the main characters than in SC1, no subgroup order modifier key or formation bypass? (WC3), can't play at slower speeds on higher difficulties and ladder games are set to fastest speed,

- Lag issues in MP even just playing vs AI mode (40Mb/s and specs below - I've tried everything suggested...), annoying how if you fail a few times in vs AI mode the game automatically reduces the AI's skill level instead of asking you about it, the game can be a bit tone deaf to how you're doing in a mission (for example if you wipe out the enemy in a mission where you weren't supposed to be able to there's no acknowledgement or extra reward), default zoom level is a bit close and you can't zoom out, Normal is pretty easy if you've played earlier RTS games, some annoying voices (Zerg tutorial assistant voice, Niadra (very repetitive acting, states obvious things)), a bit harder to read smaller details quickly in battle (telling certain units apart for example), spoils how many campaign missions there are right away via the achievements menu, uncanny valley look for NPCs in real-time rendered close up scenes (dead eyes), mostly cheesy story with stereotypical characters (Raynor shoots a TV screen in one of the first scenes, lab guy is a nervous nerd with a feminine voice, etc.), the various point values given after each mission aren't explained well (achievement points and kill/loss/economy stats are useless in terms of gameplay) - would've been more rewarding they weren't, loading time when exiting to the main menu, can't salvage other buildings or vehicles (C&C), can't destroy other seemingly vulnerable parts of the environments like civilian buildings (C&C), sometimes lacking graphical effects for in-game cutscenes (and the briefing menu for zeratul's vision campaign; some other cutscenes also have some silly moments like when Artanis is surprised by Amon before the protoss finale), no story affecting choices in the zerg campaign nor the protoss campaign, some story oddities (the protoss being too stupid/arrogant to be careful about teleporting Lasarra in after her being captured by zerg in HotS, what was Kerrigan/QoB doing between the end of BW and the beginning of WoL?, why didn't Artanis listen to Zeratul before attacking Aiur? (should trust him more by now and/or have been contacted by either him, raynor, the prologue protoss or even kerrigan about the vision earlier? - it's pretty stupid how protoss overconfidence and prejudice ends up screwing them over yet again after SC1 and BW), why was Alarak not being controlled by Amon barely questioned by Artanis and others?, why were Amon's troops destroying shrines and the slumbering xel naga's chamber entrance in mission 10 of LotV? (Kerrigan should know about the cycle that the shrines show here?), how did Amon manage to get into the xel naga sleeping chamber and kill the other xel naga?, Amon tells you his weakness pretty early on (in a vision but still), for having refused it for so long it seemed odd how easily Rohana was convinced to cut off her nerve cords/dreads in the end, Kerrigan makes it seem like she's not going to return to human before the final protoss mission, kinda lame that kerrigan is an invulnerable target in the data core hunt/moebius factor mission though it would make sense that you can't attack her if you've finished the Zeratul side campaign before playing the mission, tychus's outburst before char doesn't make much sense (how is raynor ducking and running at this point?), one dimensional protoss villains in the religious Tal'darim tribe you get the artifacts from in WoL (they are developed more in the protoss campaign though), can't assimilate zurvan or his essence into the swarm (kerrigan consumes his essence after the fight but it seems to have no actual effect), it would make sense for the other purifiers to halt their warden from attacking if you wake them up before fighting it, how did kerrigan get to the Ulnar temple before the protoss without the keystone? (would've made more sense if she didn't leave raynor right after their reunion at the end of the zerg campaign), Alarak's dismissive comments on the zerg as you land on Aiur - should know better by then, somewhat tediously long final "zeratul's vision" mission (at least you can speed the game up and basically kill yourself after getting 1.5k kills if you don't care about the achievements), some trial & error (some mechanics, getting to the secret mission - the building you need to destroy is neutral and called civilian, some unexpected intensity increases in holdout missions), achievement pop-up overload in the zerg campaign, Tosh looks like a bodybuilder despite being a Ghost (stealth unit) and the Protoss look more egyptian here, uneven difficulty here and there (protoss campaign is too easy overall, too basic Gorgon/scourge mission compared to the earlier one with the protoss shuttle escape, pretty easy final zerg mission), too much of a tutorial feel to the beginning of the main protoss campaign (you do more advanced things in the prologue campaign than in the first few main campaign missions) and too much handholding throughout it, some protoss missions are too similar to earlier missions (search and destory, key search, holdout) and their campaign is a bit more repetitive than the other two, no secret missions in the zerg and protoss campaigns, the game automatically picks (most?) upgrades for the finale where you get to play as all three species again - the choices aren't bad but it would've helped immersion if your choices carried over, kind of drawn out finale (three epilogue missions after the main protoss campaign and one of them basically repeats the final holdout protoss mission), saved up resources never carry over to future missions (occasionally gets tedious having to start almost from scratch and mostly just wait for your economy to recover),

Bugs:
-During the evolution mission intros the screen goes back to a zoomed out view of the planet you've landed on right after zooming in past the atmosphere for ~1-3 seconds (highest gfx settings, win10, dual core 2.71ghz, 8gb ram)
-Some other choppiness/delay during transitions between cutscenes
-Choppy text scrolling during the zerg campaign staff roll