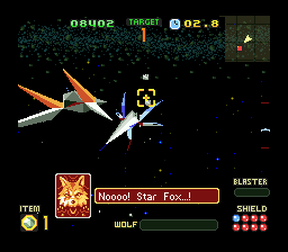 
+ Sometimes intense action, technically impressive, level design makes pretty good use of the 3D engine (new to the game are dog fights and arena/base missions (these are similar to the ones in Soul Star (MCD)), three difficulty levels (the star map is the same in each but level design is significantly different (new bosses, more interesting levels overall, viruses that take over the turret), good retro anime/sci-fi atmosphere that borrows heavily from Star Wars, transform into a walker/chicken vehicle (can strafe and jump), the controls make good use of the SNES controller (boost, brake, strafing and jumping in walker form, first and third person views), pretty good in-game cutscenes, 2-player split screen duel mode (haven't tried it), charge attack + target lock on by default (part of what makes the dog fights too easy - lock on doesn't work on the final boss), smart bombs (doesn't hit everything you can see but the explosion is very big), radar feature (can't zoom it out though), temporary invincibility shield and twin blaster (both are rare - didn't see them on Normal), ranking, better framerate

+/- Final level is a bit of a maze, inverted vertical controls (can't change it and reversing up and down in an emulator doesn't work for diagonals?), more textures on polygon models (looks decent but takes away from the abstract style of the prequel), missions are timed and the enemies on the star map get to move further during them (albeit at a slower pace), rts-like and less linear structure where you defend corneria while picking enemy targets one at a time and can use the mothership to teleport between uninvaded planets (game is paused while planning your movements on the star map, but real time while moving and unpaused but at a slower pace during missions), for some reason the mothership starts auto teleporting after you've cleared everything but the enemy base (first to where you meat star wolf, then to the base), choose a two plane team to play through the game with (six characters, two new ones (both are female), every other character is a clone of another one), can't control the turret that defends against missiles on the star map?, can't land on corneria to defend it against invasions?, can't move your ship and it's cannons separately, automatic entry into the "star destroyers" as soon as you get close, no more power up rings to fly through, can't play as the evil/enemy side, only one proper boss besides the dog fight ones (there are a couple of mini-bosses on the planets which you may or may not meet but they're pretty simple and easy), the ost is missing a remix of the corneria theme (a near identical corneria theme is in the rom but unused in-game; does feature remixes of other planet themes), no damage from flying into walls?

- Some trial & error (figuring out some mechanics, final level path and final boss pattern, some slowdown/frame drops (less of a problem than in the prequel), short length (Normal), less varied missions overall, very short missions/levels overall (Normal) and the game mostly lacks the traditional rail shooter levels from the prequel, much less interaction with your partners (you choose one which you can switch to on the star map but not during a mission, besides that the partner gives very basic gameplay hints (a bit annoying that they're repeated throughout the game)), sometimes hard to tell which way objects are moving, annoying voices (the ending has recorded but muffled voice samples, could've been used in-game so that you didn't get distracted by the action and missed messages - can't review messages), somewhat sloppy hit detection (final boss's laser attack), somewhat underdeveloped use of the transformation mechanic (very little jumping and simple switch pushing puzzles - starts to improve when the game is nearly over), somewhat unresponsive controls at times due to slowdown (less of a problem than in the prequel), unskippable (but short) cutscenes, the missile interception missions are too simple and easy (Normal),

Notes:
-2-player mode video: https://www.youtube.com/watch?v=CAzfmFt1lB8
-Unknown what the gold/pepper coins do besides restore your HP/shields?
-Info on the final, still unreleased version: http://www.nintendolife.com/news/2015/05/a_totally_complete_version_of_star_fox_2_really_does_exist