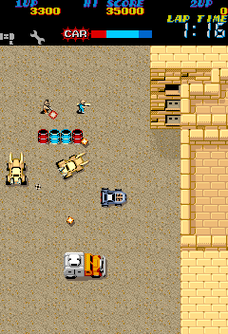 
+ Pretty fast paced and intense action, on foot and in vehicle (car) gameplay, fairly frequent checkpoints, bumping into barrels makes them fall over, enemy cars are also hit by lethal hazards (moving boulders/boxes/cannons/spiked trucks), upgradeable lifebar and rate of fire, dodge move when on foot (can't cancel the roll though which can screw you over when escaping a burning car near hazards), difficulty options (4 settings (easy-very difficult), coin worth, lives per credit, bonus life intervals), some alternate paths through levels,

+/- Level timer (can't be increased or slowed down, no time options), becomes much harder on foot (slow movement, unavoidable hazards) but at least you get a new car sent in fairly quickly after losing one), lose 5 seconds of time from dying, kinda hard to rack up points due to the timer and how hostages will run away after just a couple of seconds, no auto-fire, 1-player simultaneous only (2-player alternating), shows how far you have left in-between levels (similar to the outrun route map), no alternate exits,

- Can't drive backwards and car movement isn't more precise when moving slowly (strangely you can turn a bit better on the move by sliding after getting a speed upgrade), heavy trial & error (inconsistent damage from hazards - moving rocks on conveyor belts kill instantly, can't get some power ups?), annoyingly hard to get some power ups, unavoidable damage (often impossible to dodge cars and certain moving hazards when on foot), cheap enemy placements here and there (for example right where you spawn at a checkpoint), some annoying sfx and less than great use of the sound chips (2x OPN=almost better than MD quality), no manual speed adjustment, unforgiving hit detection around mines and platform edges and orange trucks (also inconsistent with the latter two; can get stuck on a truck and explode when you should've bounced away or make it through a passage when you should've fallen down), kinda repetitive after the first three levels, only one boss and it's easy, area 5 is easier than areas 3-4, a bit short, no alternate weapons, some slowdown, ​can’t steal unmanned enemy cars