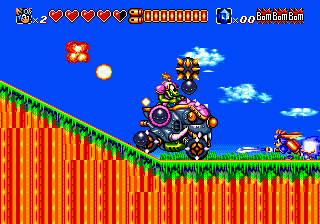 +/- Giant robot fighting segments return (In the playable intro it seems a bit drawn out and out of place though and you can miss one of the hidden items if you don’t play it), one armed bandit bonus from collecting jewels (can be a bomb, fairly easy to miss the item while moving around)

- Labyrinthine level designs (clash with Sparkster’s abilities), some tedious bosses (Genie, the yellow robots), slower paced with some tedious segments (Sonic-like pipe maze, blockades which take several hits to destroy, etc.), trial & error (boss patterns, traps), some heavily saturated backgrounds, somewhat boring autoscrolling segments, can't cancel a rocket boost, charging up to full boost is a bit slower than in the prequel (breaks flow a bit in segments where you need the full boost to press switches), can only use Gold Sparkster for the final boss