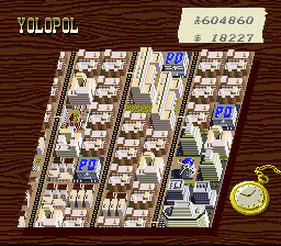 *Depends on the map layout

+ Innovative concept and mechanics (first city-building/management sim), good interface for its time (shortcut button for the sidebar menu, quick-scroll, stats on most important things), somewhat humorous, mario universe cameos, some advanced mechanics to explore (zone stacking, bugs, most efficient zone/road placement and optimizing growth via gifts and taxes, dealing with pollution and crime), difficulty options, 999+ different standard maps as well as a few scenarios to play, save feature (only two slots though), new soundtrack, basic weather effects depending on the season, trigger disasters at will (are you a mayor or a god?), pretty good introductory game to its genre

+/- Game pauses while quick-scrolling, disasters (can't be completely turned off but due to bugs you can skip those that still happen in easy mode by not powering the air- and seaports (except for Bowser having a slight chance of appearing in the 2000s)), whether or not you'll reach the final goal of the standard game (600k population) depends a lot on the map layout - 80%+ land is needed, standard game is about increasing population rather than keeping it happy (for example you can destroy zones at will without serious consequences (there are no riots or elections)), there's not much to do with your money in the late game (can't buy more gifts or manually increase the level on houses for example), top level buildings don't revert despite increased pollution or geographical changes?, no way to zoom out the view to see the entire city with in-game graphics, for a mayour role you have a very distanced relationship to the people in your city, can't raise or lower land or do landfills at will (Populous), low character limit in city name

- No mouse support, bugs (roads and railroads don't function like you'd expect them to - instead you only need to connect a zone to one other building for its transportation needs to be met and certain buildings don't even need roads, parks don't help with pollution, airport/stadium/fire department don't need power to serve their purpose), dated interface (can only place one zone at a time, slow cursor, very slow standard scrolling, 'total' window doesn't show which gifts have already been received and how many), slowdown (game becomes increasingly slow as your city grows), lacking tutorial/practice mode (need to read the manual and/or guides to learn pretty basic things), some loading times (when choosing a map or brining up map functions like crime rate stats), coal power and regular roads are pretty much useless, can't cancel a placed zone or gift, can't relocate gifts, gifts aren't regiven after their destruction, schools and hospitals auto-build frequently (at random?) in residential zones (the latter have no use to you in a regular game, you should've been able to build them manually instead), once you know how to exploit the bugs and/or play efficiently in the standard game there's not much replay value to it, the metropolis and megalopolis themes are worse than the previous ones (first one is repetitive, the second annoyingly hectic in parts and with some poor instrument samples), some annoying sfx (disaster sound)