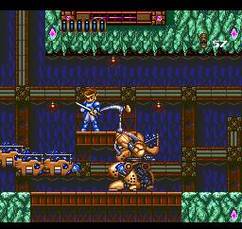 - If you shoot a projectile and then hold the fire button again the character is locked in position (this is used to control the projectile but is pretty distracting when you don't need to), very short (5 levels or so?), Pretty boring level design (mostly flat corridors with 8-bit beat em up style gameplay, a lot of dead space and no hidden stuff), leaps of faith, some actions lack sound effects (and some sound effects are rather weak like the sword slash), poor run animation on character, simple and easy bosses (train guy does nothing at all?), some trial & error (mines), no life counter in-game