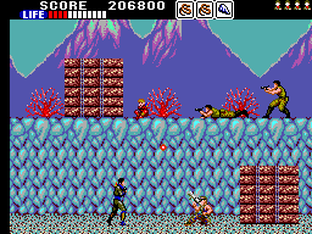 +
Ninja magic (lightning, flight, tornado, invincibility, freeze time, and multiply self - however four of them do the same thing which is function as smart bombs)
Good bosses overall
Pretty good variation
Gain new weapons and refill health/extend your lifebar by rescuing hostages
Double-plane levels (foreground and background)
Fun weapons (shurikens, nunchaku, knives, grenades and... mini-rockets!) - most of which weren‘t in the arcade version (nor any other version), less cheap samurai boss, adds a lifebar which is upgradeable (no more one hit deaths (would've been interesting to have a hard mode with it in place though along with the faster rate of fire)),

-
Some cheap hits (mostly because of the screen not keeping Jo Musashi in the center at all times when walking left or because you have to make some leaps of faith when jumping between planes, last boss’ final form, some enemy placements)
Some control/interface issues (awkward controls for using ninja magic (you have to first kill 10 enemies, then jump, keep holding the jump button to assume position when landing, then press fire, you can only hold 4 ninja magic at a time (lame considering how hard they are to acquire or even use), no sub weapon or main weapon inventory, your melee weapon attack is canceled if you crouch as Jo is about to use it in standing position, can’t manually switch between different magic?, no jump height control besides normal/super (switch planes/go up one floor))
Bonus levels turn frustratingly hard pretty quickly (you need to beat them to gain magic)
No difficulty options
No ending (just a game over screen)
Some bosses are pathetic while others are very challenging, sometimes simplified enemy behaviour compared to the arcade version, trial & error (near pixel perfect jump before the samurai boss, Mandara boss, final boss, final level), less intense than the arcade original, some so-so looking backgrounds, missing some music tracks from the arcade original