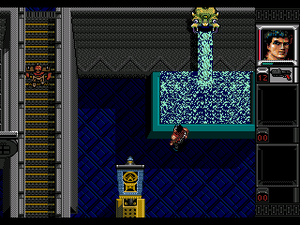 ​
+
Three different classes to choose from when starting out (Decker the worst though?, unfortunately you can't redistribute stats unlike in Warriors of the Eternal Sun)
Nice pseudo-3D looking matrix segments with more interesting gameplay than on SNES (it's also pretty much optional here)
Somewhat larger and more detailed sprites than in the SNES game
Very good character customization (put karma points into whatever attribute you want to become stronger, buy body and weapon enhancements; can't change personality or looks though)
Well drawn and large portraits for hireable characters
Can hire up to two runners/party members (for a total of 3 chars in a party) which you can also level up (unlike in the SNES game)
Cabs are available almost right away
No awkward "cursor w/o a mouse" interface (and no need to manually pick items up or open doors with it)
Save anywhere outside of buildings and combat (only two slots though)
Knocked out/killed party members' bodies + items that are lying on the ground will stay there until you leave the area
The targeting box also roughly shows the targeted enemy's current health via its color (green to red), basic combat AI settings for party members (the Posture setting, which actually does something else (set the off/def power balance) when tweaked for your currently controlled char), decent voice samples, quest and info log features (can miss some details like Ito's location at the penumbra area hotel), distribute ammo feature, some cool spells (barrier, invisibility), some cool possibilities (controllable allies, hack into corporate building security systems to turn off alarms/cameras, blow open or hack doors, sneak past guards, get protection and benefits from one of two gangs), dialogue choices generally matter, some nice cutscene stills, two side quests (second one isn't really worth it though except for the extra lore since it costs so much to get a good deck and matrix skills), doesn't hold your hand much, pretty well made cyberpunk atmosphere (with more of a meeting between fantasy and sci-fi here than in the SNES game), killed shadowrunners are teleported to where you hired them and keep their equipment, no large black border or time limits on text messages, can fight with your fists (not a tactical advantage though unless in some cases if you get Spurs), can check weapon stats in-game, no hidden time limit on hired runners,

+/-
Faster diagonal than cardinal movement
Auto-aim + fire (simply pick a target with B and hold down the button; it's slow though so you'll generally have to circle around enemies and grenades won't be efficient except for certain circumstances)
Much less linear than the SNES game
Combat starts off very tough
A bit darker and higher contrast than on SNES
No dialogue keywords/ask about feature (you still have at least three options in any dialogue though)
Can't enter a building or leave the area when in combat (can call a cab though and if you move far enough away (usually hard) the game will temporarily forget that the enemies exist)
Limited ammo for every ranged weapon (they all share the same ammo type though) - generally unlimited on SNES
Few karma/exp points gained from simply killing enemies (every 15-20th enemy (or Ice inside the Matrix); need to do runs/missions to get it faster)
Random non-combat encounters (events such as someone trying to sell weapons ilegally and cops suddenly arriving; these are interesting but can have pretty bad consequences and are hard to prepare for in advance)
No run/strafe/dodge moves, less goofy atmosphere overall than on SNES (there's still some fun dialogue and characters though), no karma penalties for shooting bystanders in the streets or doing other immoral things, no revival items/spells (you can use a med kit on a killed ally) - however if you leave the area you'll have to rehire the char and probably at a higher cost (the game also acts as if the entire party got killed if the dead char you left behind is the main char/Joshua), minor stealth elements (loud weapons set off alarms in certain areas), friendly fire from grenades, runners get pissed from being dismissed and will likely ask for more money next time you hire them, pretty limited inventory per char (8 slots, every item type takes up as much room), it's pointless to buy gun clips anywhere else than at Ares, knocked out characters can still heal themselves until the entire party is knocked out, game stays paused while in the inventory (so you can heal over and over and move stuff around without penalty), only one plot-based matrix quest and it's optional, short-term runners won't leave until you go back to the current employer/johnson for your reward, somewhat unbalanced runners (though either one is viable for finishing the game as long as you spend time building them up), can't teleport out of dungeons, ​some situations lack alternate solutions (most fetch quests, can't turn on Harlequin near the end, can't threaten people at will, etc.), most enemy attacks are unavoidable, enemies never use grenades?

-
​Invisibility is OP (only need to cast it on the lead member to cloak an entire party and it's pretty cheap)
Can't tell people you're rescuing to act defensively
Many empty safes in corporate buildings
Can't exit a corporate building while the alarm is on
No in-game area maps (only matrix maps) or tutorials
Odd how your character can't turn around on the spot but instead has to move a bit to the side (really annoying in combat or when trying to get away quickly - close combat is messy and very hard even early on (perhaps the combat should've simply been turn based instead?)
Non-matrix runs don't give high enough rewards and you need to grind a lot in the game
The soundtrack doesn't put the sound chip to good use (oddly there are decent voice samples used in some tracks but no drum samples except for in the intro one) and there are no tracks from the SNES game
Almost no in-game cutscenes (events are conveyed with plain text in dialogue mode instead) - better on SNES
Mostly awkward animations in the overhead view
Some interface problems (can't check a runner's stats before hiring, no spell hotkeys, can't equip/replace a piece of gear from within a shop screen, can't see how much of an item you just picked up nor how much money you currently have while trading in dialogue mode, current money is hidden in the pocket secretary sub menu, can't see a runner's stats in-game before hiring them), walking speed is lowered when you're attacked (or rather based on your attributes all of a sudden) - there's a code to get around this but you'll also walk faster at all times (too fast for the camera to keep up), few non-hostile NPC sprites (none that can be talked to manually in the streets and it's uncommon to be able to move around inside buildings and choose who to talk to like on SNES), some cpu-controlled party member pathfinding problems (moving between rooms/areas reunites the party though and you can manually switch between members), gang protection wards don't work very well, sometimes lacking descriptions in the manual (see below), random encounter patrols in corporate buildings (need to rely on attribute checks here or you'll set off the alarm and get attacked immediately - would've been better if you could always scout ahead somehow), no party banter and nearly all allies are simply mercenaries, somewhat limited interaction with bg objects (pool tables and regular office computers can't be interacted with, you can't repair and use vehicles, and you can't blow up anything but certain doors), some trial & error (getting the contact that sells fake badges, finding certain locations as well as the scale of a feathered serpent (Licourtrix), finding Stark (optional), some mechanics, occasional ambush attacks as you enter an area, knowing who to ask about Ilene?), some backtracking (several fetch quests, quicker if you have money for flights instead), some annoying sfx (menu confirmation sound, alarm), oddities (how some areas guards seem unaffected by you having done runs or killed people inside earlier on (the prison for example), civilians don't react to fights in the street), pretty basic final battle (the most interesting part, locking him in, is automated so you just need to get the best equipment and decent levels and fire away (healing when needed), lack of puzzles beyond the locked doors/alarm systems/sneaking past guards, so-so build-up to the final battle (very straightforward and short dungeon which looks like an earlier area), pretty weak ending (it also isn't affected by the side quests), no launcher type weapons (rocket/grenade/mortar) and only one sci-fi weapon (spurs - melee claw-like weapon), no sniper or flamer weapons, no summon spells, so-so color choices at times, can' reverse cyberware, allied mages tend to pick other spells than you've selected for them unless you keep controlling them, no duel arena (see the SNES game), some re-used portraits and sprites with palette swaps


Bugs:
-The game sometimes glitches out in bars, spawning a few enemies and treating the runner there like an enemy (could be an emulation error)
-More: http://www.gamefaqs.com/genesis/366854-shadowrun/faqs/12296

Info:
-All weapons hit for the same damage in 1 shot at max skill?
-Weapon Power=chance to penetrate enemy's armor
-Strength increases Grenade accuracy
-Cyberware can increase max attribute stats if used before upgrading the stat with karma
-INT works almost like Quickness: "Intelligence determines attack speed, plus increases combat and cybercombat success."
-Willpower also increases combat success by a bit: "Willpower resists damage from mana spells and magical drain. It also increases combat success."
-Your Firearms rating replaces any lower ratings that you have in weapon subcategories
-Another good thing about Firearms is that it can be used to jump ahead in your ratings for the three subcategories -- but only if the rating you're jumping from is 0. For instance, if Joshua's Firearms rating is 8 and his SMGs score is 0, you can upgrade his SMGs score directly to 9.
-A high Electronics score will also help you hack terminals inside corp buildings (That said you can get by with a 6 or so)
-Matrix systems with clues (get expert matrix jobs from Caleb): Aztechnology, Renraku, Fuchi, Mitsuhama, Ares, UCAS