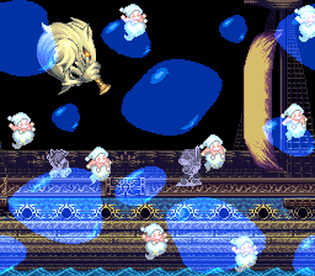 
​+
Pick your team before beginning (three different characters out of a roster of six)
Basic class changing system (can change twice per char using certain items, different classes have different abilities and stats)
3-player co-op (with a hack, otherwise 2)
Switch between party characters on the fly in 1-player mode
More character customization (character building via manual stat allocation upon level up (strength, agility=evade+agility magic, vitality=defense+vitality magic (Kevin only and only one spell), intelligence=magic attack+defense+offensive spell learning requirement, spirit=non-offensive/wisp spell efficiency, luck=critical hit chance+chest trap def), techs)
Impressive visual effects (spells, perspective effects during the intro and ending, day/night cycle, etc.), pretty good dialogue overall, combo attacks (hold A then release and press B when you see an alternate attack animation - easier with Hawk and Kevin (and Angela?) supposedly since they hit more than once/have a longer animation but I found it near impossible due to the small sprites+party members getting in the way+quick animation+no other indication of when to do it), great art direction and animation overall (the movement animation in stairs is pretty choppy), day/night cycle (some interesting uses - getting out of the second town as Duran for example, can rest until midnight or -day at inns (after the first town) or use a special seed item to skip ahead), some world map teleporters (cannon system returns) - can also summon a giant sea turtle (Booskaboo) later on to travel between certain beach spots and even later on a dragon which can be ridden manually (Flammie returns), greatly decreased player knockback when hit in combat, decent to pretty good bosses (tactically simplistic though), good replay value (different beginning stories/prologues for characters which interweave later on as well as a few unique moments per char later on, some teams talk more to each other during the game than in SoM), one optional hidden boss, nice cutscenes overall, you can tell if an enemy will cast a spell by looking at the knockback from your attack (no knockback=casting), somewhat improved NPC AI overall (they can still get confused near narrow passages and gather slowly when engaging with shopkeepers), larger inventory and added storage which can be accessed anywhere, monsters can lose their initiative by you pressing A the moment battle starts, somewhat comical tone, can push NPCs out of the way and even push enemies (won't be damaged until they attack), unlimited running outside of battle, large and detailed boss sprites, new one use items (buffs and debuffs/thrown weapons/elemental damage), week mechanic which affects elemental spell strength (gnome day/sunday=earth for example), can teleport out of dungeons with ropes as in the prequel, some memorable locations (the ghost ship, Pedan - you can view some events from the past as mirages here like Duran's father going after the villain), different footstep sfx depending on the environment, fight one boss in the sky on flammie's back, some interesting spells (aura wave - boost power bar/special attack stamina to max, rainbow dust - quadra-elemental attack, ff-style summons, enemy summon spells (six different ones) - however they appear and attack once instead of staying and fighting for you, revenge voice (enemy only) - turns into one of your chars),

+/-
Linear structure overall (opens up a bit after recruiting the first four spirits but you'll have to grind to be able to take the alternate path and then it becomes linear again, you're locked out of parts of various areas until later, opens up a lot when hunting the god-beasts)
Fairly frequent save points (three slots - Golden Axe Warrior) as well as HP/MP restoration points
No more stamina bar system (visual queue for when to strike instead - no sub 100% stamina strikes possible during battle so you can't pin enemies down and the queue halts your movement for a moment (though not every time)) - now there's about half a second delay between attacks instead
Holding A/attack triggers auto-attacking (not very efficient though)
Respawning enemies (move two sub areas/screens away)
No presentation text when picking characters (see manual), can't ask NPCs questions that might come up such as who the guy in the corner in Jada is, pointless animation during battle which halts your movement (serves as the regular attack queue when your stamina refills but it can make it harder to dodge enemy attacks), Instant/Chain-Casting trick (not as OP as in SoM though as you make two chars cast two different spells and just a chain of three is kinda tricky, can also be used to cast a single spell instantly), overpowered Poison Bubble/Aura Wave combo (Hawk as Wanderer class), only one status ailment at a time allowed (Mini cancels Moogle for example, same with elemental buffs on weapons), can't stack stat debuffs of the same kind, still have to pause to use magic and items (only mildly annoying in multiplayer), attacking at the same time as a monster can cancel your attack (and not just because of dodge/evade), automated dodging (decided by Agility stat "dice roll"), mashing the attack button (A) instead of waiting causes you to miss attacks, very controlled use of the familiars to investigate things (such as the entrance to the dwarf village), rehashes some spells/items and enemies, using a special attack while away from enemies won't deplete the special attack meter, a special attack can't be saved for the next screen/sub area (the meter resets), smaller punishment for losing a character during battle (gets resurrected with 1 HP after the current battle), gameplay pauses when spells and items are used, status ailments wear off after clearing a room/area of enemies and so do buffs (kind of tedious to keep casting sabers for example), can plant certain seeds at inns for a random item in its category (kind of annoying system for getting class change items - have to go fight an enemy then save and reload normally to reset the random number that determines what you'll get (it's based on your current exp)), missing with a special attack won't drain its charge meter here (manually/physically, not if the dice roll makes you miss), healing items can be wasted if you used right as a party member is taking a lethal hit, can't revert a class change, features mentions of slavery at one point, can't level up your weapons and spells here (you gain new special attacks when class changing and new spells when leveling up or leveling up certain stats), there are a few points where you use spirits to manipulate the environment which is kind of interesting but very underused and not very in-depth, it takes longer before you can start using spells here and depending on classes chosen you might have much fewer to use than in SoM or SoE, temporary caps on stats depending on class chosen (so for example around lvl 20 as a Monk Kevin you can't increase your Agility beyond 11 until leveling up more), partial boss gauntlet in the final dungeon (tougher versions of the first four), can grind to lower the challenge, can't use invisibility/TransShape to skip enemies without a spellcaster char (no item with the same effect),


Bugs (mostly fixed by Praetarius's bug fix hack & a 3-player hack):
-Tech LV2/3 don’t take Sabers into account damage-wise (not fixed yet)
-Sometimes an attack that KO's a party member leaves them temporarily at 1 HP for a brief moment and if you use a healing item on them at this point it is wasted (not fixed yet)
-Sometimes you can perform a special attack twice in a row (not fixed yet)
-The battle system can mistakenly think the battle in the current room/screen is over (canceling your attack and canceling or locking the power gauge)(not fixed yet)
-The game lags when reducing displayed MP after spellcasting (not fixed yet)
-The hit and dodge rate stats do nothing as the game doesn't check them when determining whether or not attacks hit (makes the Agility/Dexterity stat, the Speed Up Spell, anything that inflicts Speed Down, and shields worthless)
-The critical rate stat is not used properly (meaning the Luck stat is nearly worthless and the Aura Ball spell does nothing)
-Cut content: the 3-player mode exists, but is dummied out. It can be re-enabled with a hack or probably even a game genie code. It was probably removed due to a bug during a certain point in the game where some characters leave your party.
-Accessories originally had special effects and they forgot to remove a few of them. For example, the Cobra Earrings make you immune to poison.
-Wolf bonus stacking abuse (not sure how it works)
-HP overflow can heal enemies with 65k+ HP (not sure how it works)
-Blaze Wall and Flame Breath remove status ailments from the target
-"It'd have to be rebalanced if everything worked properly. Some bosses, like Bill and Ben, would probably become ludicrously hard if Hit rate actually mattered. If you couldn't hit them well (particularly since they use Shuriken which does hit rate down), they'd probably be impossible. Also, high Dex Hawk with Shuriken might similarly be nearly invincible." 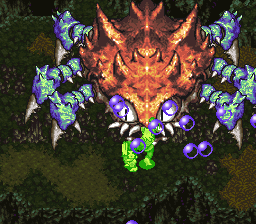 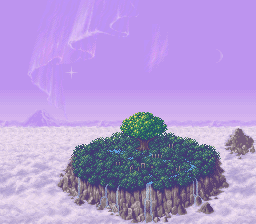 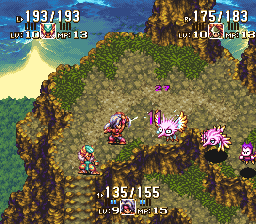 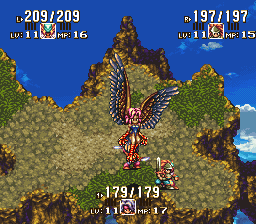 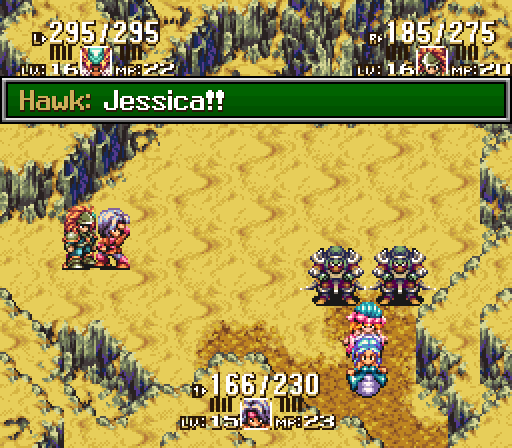 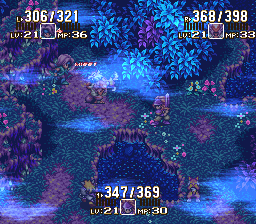 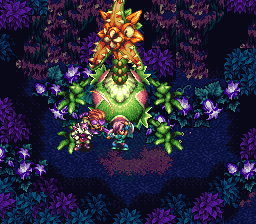 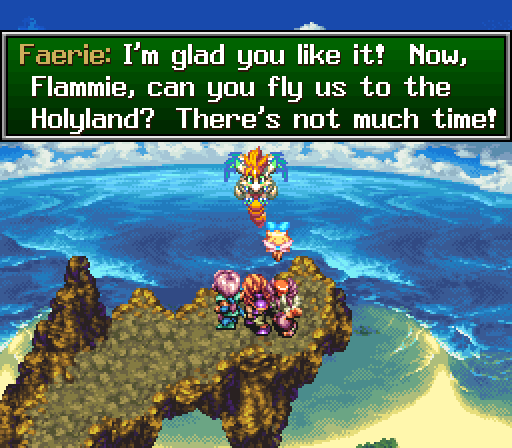 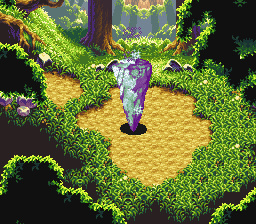