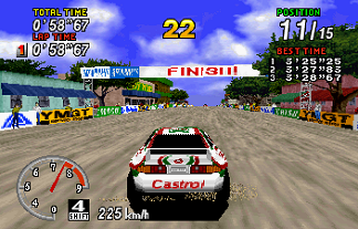 +/- Pretty hard even on easy, harder to drift than in Daytona USA, no car damage and the physics when hit from behind are sometimes a bit off, no NPCs at the start of races (Virtua Racing), funny commentary/partner voice, up to 15 cars in a race (40 in Daytona USA), commentator and arrows plus distance meter instead of a course map, race against the clock can't be turned off?, only the third course has skid marks? (Virtua Racing), two camera angles (four in VR and Daytona USA), no rumble feature?, no 2-player co-op mode (not sure how it works)?, no career/RPG mode (Gran Turismo), have to get first place on the unlockable fourth course to see the ending and to see an award ceremony, the cpu controlled opponents cheat a bit in turns,

- Can't continue from the course you were on and if you did badly on one course you'll have less time on the next (picking restart during a course will reset the whole championship), no standard racing mode (vs the other cars instead of the clock), only two cars (four including the two cars unlocked via cheats and there's also two cheats that upgrade the existing cars), over-sensitive controls (pretty easy to skid accidentally and to oversteer), the loose third person view camera makes it harder to pull off finer movements in turns (can't make it tighter), some pop-up and a few framedrops, can't wreck your or other cars, spectators don't move, the codes for the regular version don't work here?