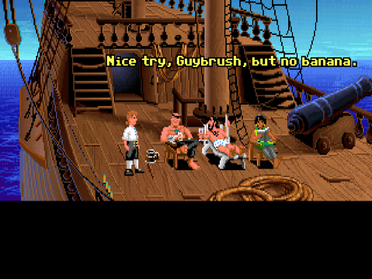 ​
+
Pirate theme (with some modern elements)
Good art direction and expressive sprites
Some good humour (cartoony, nonsensical, sarcastic, satire)
Great dialogue overall
Parallel storyline ("meanwhile" scenes) adds to the sense of time flowing without you moving things along
Some good puzzles (underwater escape scene with red herrings, the sword duel which is really an insult duel, freeing Otis with the mugs, the recipe (the cereal is a bit tricky if you can't reference it IRL)), pretty nice dialogue scenes (some animation; oddly drawn in a much more realistic style though - Carla even looks traced), sound and text speed options, action hotkeys (can’t reassign them though), pop-up text in the UI when hovering the mouse over something that you can interact with, dialogue trees, save anywhere (100 nameable slots in ScummVM), volume level options, partially open ended structure (three quests to tackle early on), nice cutscenes (can skip most cutscenes with Esc), interactive hub map (fast travel between locations, one NPC encounter), some memorable characters (Elaine, LeChuck, Smirk, etc.) and locations, very good animation overall, don't have to backtrack out of the forest maze or back to the cannibal village after getting the root on the ghost ship, alternate ending if you sink your ship at the island, pretty good variation,

+/-
Can't interact with everything/do whatever you want to an interactive object ("I'd rather not")
Sometimes no comment from the player character when trying to perform an action that you can’t (like talking to certain NPCs looking at the general area)
Using "look" on someone often makes your character move up to and talk to the NPC instead
Sometimes lacks ambient sfx
Guybrush sometimes talks on his own during dialogue
Some references to other LA games (Loom), you play as a gullible dork, role reversal in a way (the main female char and the hero's love interest is more competent than the hero and there's a twist at the end where she apparently didn't need rescuing (she was impersonated by the monkeys at some point and had also found some root beer which is pretty far-fetched but hey)) - their romance feels pretty rushed and forced though, one inside joke (guy in a troll suit at the bridge), no voice acting (uncommon at the time though), two mazes (the forest - the map only sort of helps here, the hell cave - need to backtrack to the cannibal village and make them give you a navigator head here), some of the jokes don't make sense given the setting and time period, no deaths (except if you stay underwater for more than 10 minutes which is very unlikely to happen), there's a haggle mechanic/puzzle (the ship) but it's a bit slow, no action sequences (three time-based puzzles though - mugs puzzle, cannibal gift dialogue (pointless timer), final "fight" with LeChuck), more linear towards the end,

-
Some interface issues (pushing/pulling/using the heap of rocks on the island mountain top doesn't work (only pick up), using gunpowder on the hole in the cannibal village hut makes your char put down the banana picker and go through the hole, no RMB cycling of commands, some in-game cutscenes can't be skipped)
Slow paced (your avatar needs to position itself in certain ways before reacting to an object/scene, no running, can't skip nor speed up walking animations)
Many objects and even NPCs can't be looked at
Some illogical/far-fetched puzzles (have to step on a hard to spot loose plank in the beginning several times to get the fish, putting the dogs outside of the mansion to sleep (have to go talk again to the prisoner who now suddenly has bad breath, then talk to everyone to figure out who has a breath mint, then catch him talking about a flower with a name that means "sleep" in Italian (wtf!) and go find them in the village, later you need to somehow figure out that you need to give the gopher repellant to the prisoner (who no longer wants to talk to you so you can't ask about the cake or rats again) to trade it for the cake which has a file in it to let you get the idol in the mansion))
No quest log/journal (too many items and older puzzles to keep track of on the island)
Can't ask anyone in the village about certain quests or items (how to make money for example), the music doesn't loop properly at the used ships emporium, fairly hard to find/get some items (jug o'grug - "I can't find a ticklish point on his body" is misleading, the totem nose - examining the totem itself doesn't lead to Guybrush noticing the nose, breath mint, fish, fort location on the island), some tedious parts (getting the bananas for the monkey is a bit slow and you should've been able to ask Toothrot to pull the totem nose for you, some backtracking through the village (they could've let you go to the map screen immediately except under special circumstances), ), can't use an explosion to blow up the wood fence in front of the monkey head on the island or make the hole in the cannibal village hut bigger, no alternate solutions to puzzles (except sinking the ship and killing a random ghost pirate in the village near the end), some plot oddities (no back story in-game, LeChuck just waits for you to come to him after kidnapping Elaine), some humour falls flat/feels corny (game is aimed at a younger audience though), your dialogue choices sometimes don't update based on who you've talked to or what you've done prior to the conversation,