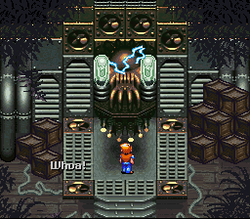 
​
​
+
Doesn’t take itself too seriously
fun ingredient gathering with the dog
lots of spells and equipment
decent-good dialogue
somewhat improved interface/mechanics (l or r to switch player, faster shop, lower characters in names) over SoM
you can 'talk' to people as the dog and have them say different things, no more delay when registering attacks, infinite running (if you have a level 3 weapon), somewhat larger inventory than in SoM (you can carry 2 more of each item), you and your dog can both attack at the same time, improved AI, allies don't need to be on-screen any more (a requirement in Secret of Mana), charging doesn't make you move slower (SoM)), secrets (items, spells, characters and quirky stuff, talk to people as the dog, some dialogue choices have minor consequences), some good puzzles (volcano exterior, Colossia, Omnitopia), Call Beads (use allied NPCs spells via telepathy), there's usually a reason to revisit old areas now (better implementation of weapon uses like cutting tall grass), Energize spell (speeds up charging - unfortunately you get it very late), you can avoid most enemy spells (either by running away or by casting curative magic at the same time which blocks the attack), the Evade problem from SoM is mostly solved by using Speed magic which you get early on, charge running (charge up to lvl 3 then press both charge and run buttons to run indefinitely)

+/-
Different currencies in each area (can be tedious, but adds to immersion)
can't run from the get go (a cheap reason to add another item to the game but it does happen pretty early on)
normal enemy attacks override level 3 charged attacks

-
No multi-player (made possible with a rom patch)
too many mazes (but most of them are easy the second time through)
some overpowered spells (energize, barrier) - when controlling the dog you can stack 8+ spells in a row making most of the game too easy
some spells require a lot of grinding to be effective (Acid Rain, Sting)
some ingredients are way too scarce or expensive (Atlas Medallion, Meteorite, Feather)
lack of elemental system (enemies being weak/stong against specific elements) contributes to making some alchemy redundant, some useless alchemy (Corrosion, Reflect (too late), Revive (use a Biscuit, Bone is a rare ingredient), Regrowth and Slow Burn (ineffective), Force Field (only works once per casting), Fire Power (too expensive to until very late game), Drain (get Double Drain shortly after), some items/spells are only available if you guess answers correctly or don't buy/pick up some items (loot before Vigor fight, Lance alchemy, Super Heal), scrolling is tighter than SoM but still too loose (leads to cheap hits and melee being less efficient than alchemy), ingredient searching can be tedious because of the dogs' slow movement + slow respawn rate on ingredients + dodgy hit detection, the pyramid is quite poorly designed (you can get stuck at one place (requiring Wings/Escape to get out), certain walls can only be destroyed if you go through the rooms in the right order, annoying enemies in tight paths), tedious backtracking for items and shopping (lacks shortcuts after bosses or major events), some plot holes/quirks (first scene with the professor - why isn't he more curious?, how did Blimp create a bridge to the desert?, why does Horace leave the camp while you're away fetching the diamonds? - could've grabbed one diamond at a time when you got back to him at the camp, the boy and dog somehow get out of the Pyramid through the bottom floor - leap over water required, super speed on Madronius after the Aegis fight, how did Tiny steal the diamond eyes? - It looked like they evaporated when summoning Aegis, parts of Ebon Keep still abandoned after the Mungola fight and there's actually no army forcing you to enter Ivor Tower via the sewers when going to fight it, Tinker doesn't react to your space ship, the professor doesn't react to you fetching the Energy Core under the chessboard, the professor kept you away from the Energy Core and didn't try to contact you at all during the whole game - why?), several underpowered bosses (Mini-Taur, Vigor, Footknight, the dragons, etc.), some charms are useless or close to it, the dog walks slower than the boy up until Gothica (why?), you're forced to level up each weapon individually (making each new weapon start out weaker than the previous one, there are also fewer weapon types than in SoM), the dog is seriously overpowered in the mid- to late game, you can't control the dog in the pig race (missed opportunity), some palette swapped bosses and enemies, some slowdown (Mungola fight),