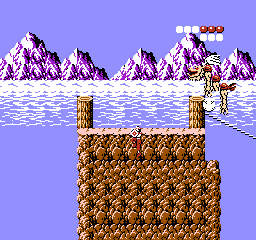 ​+
Expands the original with ARPG/Platform Adventure gameplay (gain exp which adds to attack/tone and defense/last+upgrades your life bar (automatic stat increases), gain some permanent tools with which to reach new areas in new and previously visited areas - only one of them adds to your moveset though (the others are more like keys), get clues on what tools to use and basic directions from NPCs, 2 item inventory for active items - can get HP recovery from some NPCs if you have a coat of arms item (need to beat a certain boss))
Top Down view/Side view hybrid (both have platforming and enemies)
Can bounce on some enemies (SMB except you go higher here - not used to reach new places though?)
Three spells from the get go (star tokens=MP for the three spells on your inventory screen, power up - upgrades distance/speed/strength of your main weapon until death, attack and assail=10 smart bomb attacks, recover=full heal)
Some NPCs restore your health (one per area or so)
Pretty satisfying sfx, auto-teleport out of boss areas back to the overworld, some good bosses, good mid-air control besides the lack of jump height control (not really needed as there's no difficult platforming)

+/-
Unlimited continues and you respawn at the beginning of the current area (no exp or MP loss, 3 HP restored)
Some enemies can jump down through platforms that you cannot
Frequently respawning enemies in most areas
NPCs act like pieces of a walkthrough and you can't manually ask them anything
The crossbow and pulley are very similar in use - the former creates rope bridges and the other lets you move across them
Mostly linear structure (can move some ways into the second and third areas in the beginning, after getting the pulley+the crossbow you can pick between two areas), can't gain any more spells, only one piece of armor, no alternate main weapons, some invisible walls in the overworld area, several death pits and you die from falling into water, no destructible walls, borrows the flute's function from Zelda, the final boss was pretty easy for me coming into it with full health and 11 HP (didn't have to use the potion, I only grinded for for full MP 2-3 times over the course of the game and killed what I encountered while exploring; I could've gone back to the first area and relied on health drops at times to not level up but that would've taken much longer)

-
No save or password save - the game's not that long though
Some control issues (no jump height control, can't jump off of or onto ropes, can't jump off of the grappling hook rope, can't duck and attack on platforms after getting the grappling hook, kind of sloppy hit detection around when attaching the pulley to rope bridges in top down areas)
No side view area maps (first area is mapped in the manual - also shows the overworld layout with marked exits to side view areas as well as which area holds what item) - mostly maze-like areas with some dead ends
Health drops are too rare (MP drops are also pretty rare) - leads to grinding
Trial & error (jumping down where you can climb down via a rope kills you, if you stand still when entering a new room/area it's likely that you'll be attacked by enemies spawning close to you, the grappling hook can hook onto things off screen at times - at least it's hinted at in the manual, the flute isn't explained - opens a door at one point after having beaten 5 bosses)
The lapis boss kinda sucks, a bit repetitive and a bit short (fewer bosses and dungeons than in Zelda 1, repeats some enemy types a few times), some dead space and backtracking, the smart bomb spell is too strong against the spider boss and the tower boss, sometimes unavoidable damage when crossing the gaps in the Primeval Mountain area, low max MP capacity which can't be upgraded (7 which is what a healing spell costs), some sub areas are quite small and straightforward, some flicker and slowdown, lame music in dorago palace, some NPC advice is useless,

​
​Bugs:
-Hit detection bug where I got temporarily stuck in the ground happened once (see screenshot)