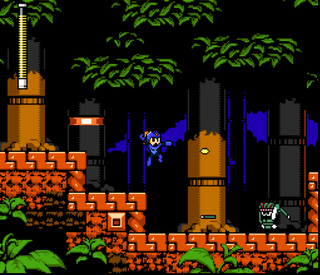 ​
+ All new bosses and enemies (most of them), dash move, fast paced, good variation, switch weapons by the press of a button (can't switch while a shot is on-screen however and it only cycles one way), good bosses overall, some creative level design (Jet Man, Forest Man, Shark boss), password save

+/- Easy to farm for power ups and extra lives, longer stages, can't refill weapons after dying to a boss, final boss is much harder without the right weapons, bosses are pushovers with the right weapons, can skip parts using 'rush jet' (however it can only be acquired in the Volcano Man stage), dashing controls are both set to a button and double-tapping forward (caught me off guard), dash move replaces slide move (there are a few instances where you'd want it, however it might overcomplicate things to have it)