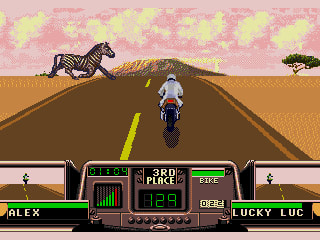 ​
+
Somewhat smoother scaling and overall framerate
Grab enemy weapons to use against them (RR2)
Can keep your weapon for the next race here
2-player split screen and 1 on 1 race/"mano a mano" modes (so-so framerate here, can select starting weapons in 1 on 1 mode)
Adds a weapon inventory (up+start to switch back to punch)
Enemy AI is more aggressive here?, two new weapons (oil can - drop oil spills on the track behind you, cattle prod), some new level gimmicks (chopper that chases you and tries to dive into you on some tracks, some ramps at the side of some tracks, moving animals on some tracks), password save (doesn't save your weapon though), rival comments in-between races are back (RR1), can't crash from riding into enemy bikes from behind here (same couldn't happen to you in RR2), some funny end of race cutscenes (they can be good or bad regardless of your performance though which is weird), pretty satisfying sampled sfx, regenerating health (for all racers)

+/-
Over the top/loose physics (can actually bounce off of the chopper)
Doesn't re-use any tracks or music from the first game (there are 8 tracks here and they are themed after a country rather than any specific location within a country now - Brazil, Germany, Kenya, UK then adds Italy, Australia on skill level 2 onwards then finally Japan on level 3 onwards)
Features Police that can arrest you if you crash (can be frustrating when a cheap shot made you crash)
Same amount of bikes (16) and it re-uses some from the previous game
Less smooth and detailed visuals in the rearview mirror (same as in prequels), you can fall off your bike and still win if you fly or run past the goal line, '90s 'tude

-
Slightly worse presentation between races than in the first game and the in-game pre-rendered graphics look somewhat worse than the sprite graphics in RR2 (color choices are also worse overall)
The music actually sounds a bit worse overall although it does use PSG now (not even the menu music uses drum samples here, somewhat weaker drums and some annoyingly scratchy guitar leads, many tracks start off based on national anthems in a hard rock style which is pretty cliché and cheesy) - also still can't have engine sfx+music playing at the same time
No difficulty options/can't pick skill level at will - have to qualify for 5 races and then it moves up one level
Still pretty repetitive (the game feels kind of drawn out in terms of how quickly you can get new bikes and repeats some tracks more than others, tracks become too long after skill level 2, tracks are more or less straights with minor-moderate turns and a rare sharp one here and there throughout (still no course maps though they're not really needed))
Can't sell bought upgrades
Some trial & error (hills with objects or sharp turns on the other side, sometimes still hard to distinguish objects in time at higher speeds and sometimes there are cheap situations with a still car in each lane, suddenly need to start braking in some turns on skill level 3), can't stick around at the current skill level unless you keep not qualifying (reaching first-third place),