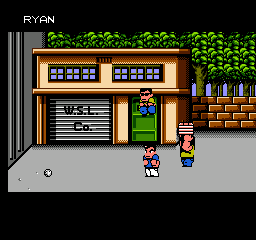 +/-
Money stats on a separate menu (press select), your health regenerates slowly, need to keep the book which taught you a move (in your limited inventory) to keep the move, need to kill everyone in an area to make the boss appear

-
​Can't run up/down, cheap hits (projectiles from off screen, enemies appearing right behind you when entering an area), uneven difficulty (second to last boss harder than the final boss, two bosses in a row), bounce off walls and fall over if running into them (this even drains health), loose scrolling (hard to react to enemies), no map (backtracking required at one point), very long passwords, some slowdown, can't talk to 'civilians', clunky menus, somewhat clunky control when jumping or running (autoruns even after releasing d-pad), a bit repetitive, dead ends, AI is sometimes very stupid (enemies never jump up to your level when on higher ground, you can stand and punch and bosses will walk into you repeatedly), javelin man skill is useless, same strategy works on almost every enemy, short (~45 min)