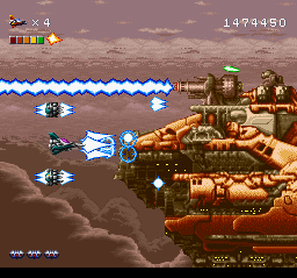 
+ Sometimes technically impressive (large and detailed sprites, parallax, little to no slowdown despite many sprites on screen, lvl 4 boss, lvl 7 tower entrance), mixes in several shoot 'em up levels (where you keep your health bar like in Turrican), Contra-like gameplay, smart bombs, decent weapon system (four different weapons, three levels each, unique smart bomb depending on which weapon you have equipped), difficulty and control options, password save, weapon inventory (and no need to worry about picking up the wrong power up when trying to upgrade weapons), temporary shield power up (pick up HP when at full health), you can turn around in the shoot 'em up levels (press B),
player color options, shows bosses' health bars, some good bosses (lvl 4, lvl 6 (big face), the two bosses before the robot spider, parts of the final boss), good jump height and horisontal mid-air control, a few detours for bonus power ups, gun drones that can be used as shields,

+/- Respawn on the spot (current weapon loses its upgrades), the game takes a couple of levels to introduce all four weapons, pressing l/r lets you shoot diagonally while standing still (good) but doesn't work while moving (sloppy!), health power ups are fairly common, switching between weapons to use different special attacks efficiently takes some getting used to (the blue one can only shoot left or right for example), regenerating smart bomb stock, can't move backwards in most of the levels, can't switch weapons while using a special attack, special attacks/smart bombs don't give incinvibility time and don't destroy most shots, no slide or dodge moves (would've been useful at times), no boss in lvl 2, sudden visual boosts where pixe art is used for larger sprites, you don't get to destroy the lvl 7 boss unless you were fully powered up? (moves away after a minute or so), press select for speed adjustment during shooter levels (no indicator or tutorial!, default speed is too slow), somewhat forgiving hit detection in the shoot 'em up levels, lvl 8 borrows heavily from japanese shooters like Gradius and Thunder Force for its bosses, need to lose all lives to get a password (would've been better to give one per beaten level as well), no speed adjustment for the flying platform in the final boss fight, silly ending text (a melodramatic poem), no level complete screen (and no rankings except for the high score list), the shield protects against laser traps in the run 'n gun levels (helps flow but makes those parts much easier obviously), half the game is made up of shoot 'em up levels

- No continues on any difficulty and extra lifes are somewhat rare, somewhat loose scrolling in the run 'n gun levels, trial & error (taking the right path in the high speed segment of lvl 8, picking the right weapons for parts of lvl 8 (need the smart bomb to not get hit), a few leaps of faith (can't look down/up), learning when not to shoot so that you can grab power ups from their containers (these float in a sinus shape and can end up too close to the top of the screen to grab (since the power ups themselves also float upwards in for example lvl 1), they also disappear if they float below the screen which happens in level 2 at one point if you don't shoot the container immediately), cheap attacks here and there (back attacks in lvl 4, the huge explosion from the ship moving into the foreground on level 1, some enemy placements near pits), unclear pit in the first level, boss patterns), repetitive level design overall, some unavoidable damage (parts of lvl 7 and 8, first boss's flame attack, elevator segment in level 2), many easy but resilient enemies (there are also obstacles that do nothing but take forever to destroy (the doors in level 2 and 5)), somewhat slow falling speed and it's odd how you start falling immediately after letting go of the jump button, sometimes uneven difficulty (spikes: high speed part and boss gauntlet in lvl 8, easy to miss power ups in lvl 7 and lvl 8, no life refill after the first boss in lvl 5, sudden death trap in lvl 6 (where previously you only took damage from touching the ships), elevator in lvl 2, drops: semi-safe spot at the boss before the crusher boss in lvl 8, some shooter segments are much easier with the right weapon, easy first two phases for the final boss, lvl 8 skull boss (safe spot in front of it; it also gets easier as you fight it - no challenge at all towards the end if you have gun drones), easy second boss in lvl 5 (the walker - can stand right in front of its sprite), slow paced and easy first half of lvl 3/first shooter level, parts of lvl 4), green weapon is like a weak version of the spread shot in the shooter levels (at least it has the smart bomb), generic presentation (no intro and bland looking in-between level splash screens, when you get you hit you just flash and there's no sound effect for many things where you expect there to be, art direction is often similar to American box art from the 90s (often using dated pre-rendered models that look copy pasted in (similar to DKC), somewhat dark graphics overall), confusing boss entrance in lvl 5 (need to backtrack a couple of screens for something to happen and after the boss you're not told to go backwards in the level) - at least the entrance is pretty cool, invisible roof at the top of the screen in lvl 1, suddenly introduces checkpoints in lvl 5 after the first boss there (wtf?), long stretch of dead space after the third boss (the core) in lvl 5 (why?), can't quite reach the top of the screen in lvl 6 (a shoot 'em up level), somewhat drawn out and repetitive final level, so-so guitar samples (boss theme), loading times (~8-9 seconds per level)

Note:
-The game is not a one man job, contrary to what some will have you believe (~10 people in the credits)
-Sometimes freezes in SNES9x