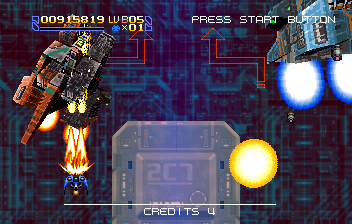 ​
+
32+ (!) strength levels per weapon - need to focus on 3 at most and completely destroy each boss to reach those levels though?
2-player co-op (makes it harder to level up your weapons though)
very good variation
includes the arcade mode (one branching path - choose between s2 or s4 after s1, much less story, 5 less bosses and 2 less songs, no final boss music, unlimited continues)
difficulty options (4 levels?, different enemy patterns and numbers+different boss patterns, number of lives per credit, point intervals for extra life rewards) and control config
bullet (and wall) grazing gives bonus points (flying very close to enemy bullets)
some cool weapons (the sword works like an evolution of the HP-based attack in Alien Soldier - block pink projectiles with it to charge it up and unleash a smart bomb-like giant sword attack (it can also either be held out or swung similar to Zelda 3, invincibility time during the charge attack), three different homing beams - one with lock-on crosshairs in a circle shape a bit like in TF5), large and detailed bosses, 2.5D elements (mostly visual), very good bosses overall (multiple phases for most, several different destructible parts and if you destroy all of them in a fight you get a continue), nicce fmv cutscenes and several in-game ones with dialogue and portraits (skippable), save feature (saves your weapon levels (Saturn mode only) - can restart the game with the levels saved for a new game+ of sorts), unlockable level select which also lets you start with saved weapon levels, weapon inventory, hidden point items (dogs; find them with the lock-on weapon), combo/chain system (destroy enemies of one color to rack up more points), some creative hazards and bosses (pacifist-style final phase of the final boss, laser trap cage, electromagnetic traps, destructible walls/turrets that collapse other structures when destroyed, spinning circle of pieces of cover boss, spinning red battleship and final boss, morphing cage boss), various nice special effects, impressive SCSP (saturn chip) music, shows bosses' health bars (also show short boss descriptions before meeting them in engrish which are kind of funny), good art direction overall (some projectiles look a bit silly in an unfitting way such as at the last boss), the aural flashback during the final phase of the final boss makes that part more climactic,

+/-
Start out with all weapons (7 different ones - kinda hard to keep track of all of them but it makes it easier to keep going after dying (you also keep your weapon levels))
respawn on the spot
forgiving hit detection
limited continues in Saturn mode - gain one more continue for every hour played and 100% boss destruction (can only gain 2 per game session though, odd system as it rewards skill with an easier game and the game doesn't display the total properly)
blue enemies are less common than red ones and yellow ones are even less common (you can also get secret bonuses by destroying red, one blue then yellow or yellow only)
use-based weapon level progression, starts out tough and gets tougher, bullet hell-style shooter (does have a lot of level hazards too though), no ground attacks (Xevious etc.), mashing the button is better for the double beam homing weapon? (blue electric beam), some bosses can block some projectiles like the spread shot (blue plasma), can only save after dying - not save and quit, mostly orchestral OST,

-
​Easy is still very hard unless you grind your weapon levels and play with upgraded weapons
no speed upgrades and default speed is a bit slow
trial & error (some cheap attacks from behind and the side, boss destruction percentage also affects weapon levels - you get a bonus to all three main weapons plus a bonus for each fully destroyed part, a lot of it has to do with what weapon to use in what situation, sometimes need to save a charge attack for later since you can't carry more than one at a time, mechanics unless you read the manual, boss patterns, completely destroying bosses can be rather unintuitive - I often got 90%+ thinking there were no parts left)
difficulty spike at stage 4b (two safe spots here though - bottom left in laser cage then bottom middle at the main s4 boss during one of its attacks, ) and the last boss (very hard to beat/not have it self-destruct even with well upgraded weapons and on Easy)
some slowdown (pretty rare)
​no cycle through the weapons button (right and left attack buttons for the sword would've been useful too as it will swing only in the direction you last moved your ship in), somewhat lacking weapon level display (better in the XBLA version), a bit too long in Saturn mode (~1h25m), the green homing weapon is kinda weak?, too frequent bosses in Saturn mode, the game is not that good at introducing a new level/boss gimmick and letting the player learn it before ramping up the challenge, safe spot in the upper part of the screen vs. the spinning blocks boss on Easy (Saturn), bosses self destruct if you can't beat them quickly enough (hidden timer, a bit counter intuitive in terms of gaining weapon levels since a great player won't need them as much), several bosses take too long to kill even on Easy, a couple of boss phases in Saturn mode kinda drag on (second battleship in stage 5, bird boss in the final stage), harder to see enemy bullets during the VR/wireframe boss
​