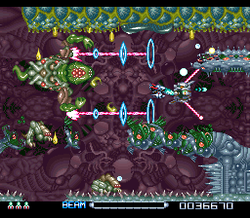 +/- Adds checkpoints (they can be a disadvantage at times though), no manual speed adjustment (need to collect power ups)

- Slowdown (less than in the prequel but not by much), extreme trial & error (sudden stop in stage 1, parts where you need to have a charge shot ready to destroy a blockade, final level, running lava segment, enemies coming in from behind), sloppy hit detection at times (eye projectiles on second boss), no difficulty options (unlockable hard mode, no easy mode), weapon sets itself back to Beam after using Hyper at full power and cooling down, very hard to recover after death (steep difficulty curve as well)