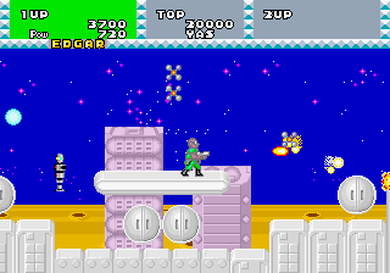 
+ 2-player co-op, 4 different characters to choose from (can select which one when starting and after each continue unlike in the first version), jetpack flight, movement/weapon/jump height upgrades, impressive FM music for its time, pretty good voice samples, difficulty options (4 levels, starting life options), you drop the boots/spring/jetpack when hit and have a chance to get them again, can crawl, can move and shoot, stop watch item, destructible walls in some levels (they kinda overdo it at times with multiple walls in a row though), temporary invincibility, can destroy some enemy bullets,

+/- 2 is more of an updated version of the first game with twice the levels (32) and 2-player instead of 4-player, life is gradually drained while playing, constantly respawning enemies, pretty slow flight movement, can't shoot upwards unless you're on a ladder, somewhat less interesting bosses than in the SMS version (on the other hand you have to fight respawning enemies at the same time making the fights more intense), no auto-fire, the jetpack doesn't carry over to the next level, no vertical scrolling, one female and one black protagonist, level timer (a grim reaper eventually appears and chases the player)

- Get knocked over for a sec every time you get hit, poor jump height control (need to crawl to jump shorter and there's a delay - there's also too much of a difference so you can't jump up to a higher platform), can't crawl when standing against and facing a wall, upgraded beams are too similar to the first one (just a bit wider and faster), repetitive and simplistic levels, getting the key might've been more interesting if the keyholder/boss tried to run away more often and you had to trap it using various tactics (they do make it run in stage 9), not enough of a HP refill/boost after each beaten level (half a HP out of 10), kinda generic sprites overall, no alternate main weapon or sub weapons, no ending? (loops after stage 32),