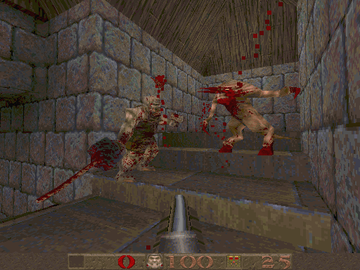 ​+
Fast paced
Fully 3D world with mouselook (need to hold a button down in the original version though)
Strafing
Swimming underwater
Some good weapons (grenade launcher, rocket launcher)
Popularized online multiplayer (death match)
Plenty of secret areas/rooms and the game shows how many you found after each beaten level, Some secret levels via alternate exits
Some innovate level design (spike and boulder traps, lighting effects?, minor switch puzzles - first boss for example, low gravity levels - would've been better if you had some mid-air acceleration+some jump height control+somewhat faster falling speed here though, moving platforms triggered by switches, switches that trigger traps that crush enemies, grenade jump while invulnerable to reach a teleporter into a secret area, treadmill trap before a door)
Damage boost power up (quad damage, the knockback of your attacks is also increased)
Difficulty and control options (hidden very hard/nightmare mode in the hub area which serves as a difficulty select, can change difficulty modes in-between episodes)
Temporary invulnerability (armor is still damaged from hits and you still take knockback) and invisibility power ups (monsters will not target you unless they are provoked)
Good feedback from attacking and taking hits
2-player co-op mode
Enemy infighting can happen (Doom)
Some shortcuts
Some interesting new enemies (fiend and spawn (the jumpers), enemies with separate melee and ranged attacks (death knight's ranged attack is generally pretty easy to dodge though), zombies need to be blown up to be destroyed, homing projectiles that you can outrun but have to make hit walls as they'll just keep going until hitting you otherwise)
New enemies tend to appear as you're backtracking through part of a level
Kill the final boss by teleporting into it and exploding it from within
Some large and detailed models

+/-
Save/load anywhere (20 slots, tells you the level and your kills compared to the max amount but not the date or time and not which was the most recent save)
Healing pool in one level only (palace of hate/e4m4), Health refill after each level
Partially non-linear structure w/ maze-like levels (can choose which order to do the episodes in but not switch mid-way through - later ones are also harder and the difficulty curve is static, can do part of some levels in any order and play the optional secret levels in-between some of the main ones however)
No crouching
Ammo-based weaponry
Some ideas were scrapped (nail gun crucifixtion, offering corpses to gods, flips and melee wrestling, RPG-like gameplay)
Very few video settings
Sometimes odd sound design (far away enemies/enemies in different rooms sometimes sound like they're right next to you)
No interact/hit switch button (means you have to switch to the axe to not waste ammo on movable walls and switches)
Two of the eight weapons are upgraded versions of other weapons
Brief narrator's text in some levels (tutorial of sorts, sometimes gives hints to opening a locked door)
Gore
>100 HP power up doesn't carry over to the next level
An enemy using a certain weapon doesn't mean it'll drop it when killed
Short levels in the first episode (decent length in the second, )
Fewer exploding barrels than in Doom
Can't grab ledges and climb up or lean around corners (System Shock)
Easier to find the secret exit than the regular one in E3M4
No crosshair
Sonic-style air tubes in some levels (lack of forward momentum after using an air tube and exiting upwards - used to make you find a secret path instead on that level but could've been used for some crazy jumping)
No pistol, laser gun or BFG
Having a moving object control where you end up when teleporting could've been used elsewhere
Some instant hit/hitscan attacks (yeti-thing, shotgun soldiers)

-
Trial & error (the final boss - have to notice that the spike ball controls where you end up after walking into the main teleporter and that it goes into the boss at times (if it's not inside the boss it'll probably throw you into lava, shooting the boss itself also does nothing even though it looks like you're damaging it), various traps, ambushes, biosuit partially protects against lava, figuring out what opened when pressing certain switches - the game doesn't show you with the camera (can be tricky to find exits to secret levels in particular), sometimes you have to use a one-time power up to reach a secret area such as using invulnerability to go into the lava in the first secret level (no "restart level" option) - rare though, various secret areas (overly subtle movable walls or switches, shootable switches placed where you wouldn't normally look), point of no return making you unable to backtrack for secret areas in some levels like E1M6, invisible wall when dropping down near beginning of E4M2, finding the secret level in hell's atrium - have to not trigger the bridge near the end+jump super small poles to the other side (no visual clue), thunderbolt gun kills you underwater - should've also worked when firing into liquids where enemies are, )
Pretty easy to get lost at times (no map function + drab environment and mostly maze-like levels, sometimes marks the path forward with arrows which feels more arcade-like)
Equipment doesn't carry over between episodes
Sometimes dumb AI (can't hear you coming if turned away until you're very close, sometimes moves away from you when it's not beneficial, sometimes doesn't react to combat happening in the same room they're in)
One-way doors can lead to backtracking (generally there's a shortcut somewhere in the level though)
Can't replay a beaten level (to get all the secrets for example though if you save right before the exit you can reload) nor a beaten episode
The menu and in-game text becomes too small on higher resolutions
Some rewards for finding a secret room/area are pretty meh (just some ammo or health)
Biosuit and other power ups are auto-used when picked up (sometimes leads to them being wasted if you don't know where to use them or if you found them after clearing the area around them)
Easy first boss (decent idea though) and no real bosses for episodes 2-4 (just stronger enemies at the end of each). The final boss fight is also a puzzle of sorts but it doesn't really work since the new mechanics aren't communicated well - once you do figure it out it's also pretty easy
Kind of repetitive at times
The ogres are a bit overused (kind of spongy and shoot grenades)
A bit too easy to get stuck on corners of walls and other objects as well as certain enemies
Kind of lame storytelling (just some text after finishing each episode plus it appears rather slowly, story is also pretty cheesy and cliché).
Some waiting for moving platforms (E3M4, certain elevators)
Enemies sound the same if underwater as outside of it
No visor or berserk power ups (some dark rooms or parts of rooms - palace of hate in particular)
Somewhat unforgiving hit detection on the yeti-like enemies (rocket launcher)
So-so animation (smoother enemy movement in the HD mod), Some enemy models look pretty bad and/or silly due to low poly counts
While the ambient music generally works well there are moments where something more upbeat should've been used or there could've been a transition into an encounter track for more tense moments. Some tracks are also pretty repetitive
After the congratulations text at the end the game doesn't go to a staff roll or back to the title screen (feels unfinished)