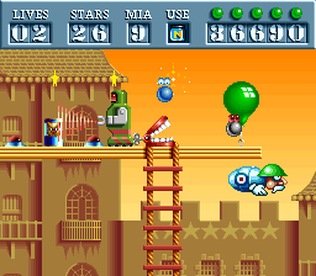 + Sightly tighter controls (faster and less vertical jumps, still think stretching could work like a punch), more advanced and varied levels (now scrolling in both directions), can now pick up various items to use as tools in the levels (springs can be moved, bombs can be carried and thrown at enemies, etc.), ride a vehicle (a zeppelin/ballon thing - lets you use bombs from the air if you have them), improved art direction (better shading, sprites have better definition and personality, somewhat less busy backgrounds), no need to carry one "hostage" at a time and they don't take up the item slot, two-player split screen mode, control options, password save (once per world), decent intro cutscenes (one or each world?, only uses part of the screen though and they look very similar), teleporters now in fixed locations and no longer hidden randomly (you can see them (moldy cheese) but still have to search for their location), the cat is now a mini-boss type character that pesters you and can only be knocked out temporarily (or teleported around with the cat item?) and it doesn't taunt you, better feedback from interacting with other creatures overall, burp sound now used as a joke (a DJ appears and plays a short track using it as a sample if you absorb the note power up - funny and it stuns some enemies), upgradeable punch (into a ranged attack and later on a wandering bomb blob) - lasts until death or until it's upgraded, items stay until picked up?, occasionally features more straightforward levels, somewhat higher quality music than in the amiga version,

+/- can't jump down through platforms that can be jumped up through, no knockback after taking a hit, can't destroy nor absorb some enemies?, can move through most enemies as only their attacks hurt you, can't stretch nor jump through some platforms, health items refill less health each but generally appear in groups (punch boxes) - makes it take longer to refill your health, some other enemies still talk but it's not nearly as annoying as some of the stuff in the prequel, no more respawning enemies? (the game regularly spawns flyers that enter the screen from either direction though), no smart bomb (inflating now makes you fly instead but still costs health)
stretching isn't faster than walking, can't stretch downward through a platform unless you can reach ground below with the stretch (same length as before), look up/down by stretching, while there is an item inventory you can't cycle between the items, food explodes when eaten, hard to rack up extra lives (stars only give points!) - apparently you need to absorb the spinning golden robots to gain them, using the balloon drains health (seems weird since it's not that useful overall), there's barely any need for the stretch move besides moving downwards and looking up/down, no time limits, life refills after every beaten level
can move through but not land on spikes? (they kill instantly), unforgiving hit detection for some enemies when using the wandering bombs (flyers in general need to be hit from above), the game is a bit too easy when you have one of the ranged attacks, a few randomly hidden doors leading to bonus rooms (nothing special in these), "jungles of squirt",

- Unfinishable without a password? (see below), still no invincibility time (but you take much less damage per hit now), no continues, forced collecting to progress (leading to some backtracking and aimless searching), larger levels but no maps and there are too many blobs to rescue per level later on (at least the game shows you where to find the exit after all blobs are rescued), no tutorial, some control issues (slightly worse jump height control, can't pick up/absorb more than one thing per duck? (it's much more rare that you'll need to here though), some delay after landing or ducking, can't move sideways while ducking/flat (some enemies will stand there and keep attacking until you stand up but in this game their attacks are less frequent), can't stretch out of the duck/absorb state (annoying when moving downwards in a level by stretching), can't use either l or r and the d-pad to control punches, still can't stretch onto moving platforms), no difficulty options, can't skip the first company logo when booting the game, the screen still doesn't keep up if you fall too far, some trial & error (occasionally hard to tell if you can or can't stand on something, can't tell when your attack will upgrade?, sometimes hard to tell if touching an enemy will hurt you, some shots from off screen (mortars), some leaps of faith, some mechanics, some one hit kill attacks), can't choose starting level from 4 different ones like in Super Putty, can't rescue blobs while in the balloon, somewhat loose upward scrolling when jumping, third world looks very similar to the first one and the fourth world looks almost exactly like the third one, somewhat weak and muffled sfx when killing enemies (better on amiga), can't switch between attacks, can't save the balloon for later, looser scrolling to the right than to the left, very floaty controls for the balloon, only one boss and it's very easy (just use the balloon and bomb him), repetitive (re-uses enemies/hazards/gimmicks a lot) and way too long (~2 hours if you don't die), can't skip the level complete screen, no music change when you reach the end and the ending is somewhat worse than in the prequel, pointless mask and glasses items? (glasses might show hidden doors),

Bugs:
-can't exit the ghost train level! (snes9x) - need a password to the next world (see YT)
-some enemies disappear without an animation when jumped on,
-the rocket shooting enemy can downgrade your attack (perhaps not a bug?),
-the hidden door in a level in the world before "fun house" isn't always hidden (at first it was fully visible, later in the level I had to pass by it to see it)